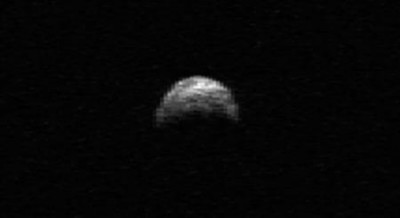 This radar image of asteroid 2005 YU55 was generated from data taken in April of 2010 by the Arecibo Radar Telescope in Puerto Rico. REUTERS/NASA/Cornell/Arecibo/Handout

We aren’t on the verge of Armageddon and no we won’t need Bruce Willis’ services, but brace yourselves, a large asteroid is on its way to Earth and will come within 201,000 miles of our planet.

The large asteroid, appropriately named 2005 YU55, is on its way to pass by the earth at 6:28 p.m. EST, Tuesday, November 8th. It will be visible in the northern hemisphere and won’t be seen by the naked eye. It will also be too fast for the Hubble Space Telescope to spot it.

Thousands of professional and amateur astronomers are poised and ready to watch the asteroid as it passes by. It will give scientists an opportunity to study the asteroid without having to launch a probe.

These celestial events where objects pass closely to the earth are only expected to occur a few times a century.

It’s the first time since 1976 that an object this large has come this close to Earth. During that time, no one was aware of the potential armageddon, not even astronomers. That asteroid wasn’t discovered until 2010. And only then, using Newton’s law’s of gravity was the path calculated.

YU55 is about 1,312 feet in diameter. For a good visual on what this really means in a scaled down model, read Science 2.0’s Seeing Armageddon in a Grain of Sand article. In it, they compare the earth to a blue house and the asteroid to a grain of sand passing within 1,100 feet. Not so scary when you look at it in those terms.

Astronomers have projected YU55’s orbit around the sun for the next 100 years. There is no chance that it will collide with the earth or the moon during this time.

The asteroid is believed to be made of carbon-based materials and some silicate rock. It is blacker than charcoal. Scientists plan to study its composition and structure using radar images and chemical studies.

According to Science 2.0, it won’t be until 2028 that another large asteroid, 2001 WN5, will get close to earth. This asteroid is larger than YU55 and will get even closer. You may be able to see it with a good pair of binoculars.

In 2029, asteroid 99942 Apophis will come extremely close to the earth. It is approximately the size of YU55 and using their blue house scale, it will come within 110 feet. We may need to put Mr. Willis on standby for that one.

Annular Solar Eclipse This Weekend – Share Your Photos With Us
Get an Email When the International Space Station is Overhead
Comet Pan-STARRS Makes Bright Appearances in Night Sky
Alex… Astronomy and Music For $200
Folklore or Science… Is a Blue Moon Really Blue?
Earth's Sunset is Spectacular but Not Rare from Space
Space Camp Science – Build Your Own PVC Rocket Launcher
NASA Bombs the Moon – Collision Easy to See
0 replies

A New Twist on the Tablecloth Trick 11-11-11 – What Does it Mean?
Scroll to top
Create a new list