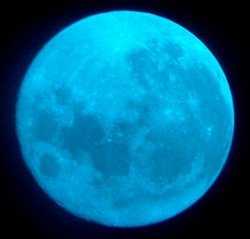 You might have overheard your local television meteorologist say something about a blue moon. Of course, my boys were hoping to see a real blue moon, but instead, they were treated to the second full moon of the month. According to popular definition, a blue moon is the second full moon in a month… and as you might expect, NASA has more to say about it…

According to modern folklore, a Blue Moon is the second full moon in a calendar month. Usually months have only one full moon, but occasionally a second one sneaks in. Full moons are separated by 29 days, while most months are 30 or 31 days long; so it is possible to fit two full moons in a single month. This happens every two and a half years, on average.

But you can imagine the disappointment in their voices as my three boys ran outside to see… a normal full moon. “Dad, it’s not blue… that stinks!”

A little more digging on the NASA site and we discovered that there was a time when people on Earth saw a real blue moon. 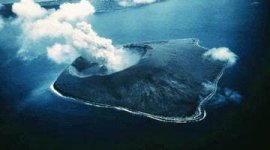 There was a time, not long ago, when people saw blue moons almost every night. Full moons, half moons, crescent moons–they were all blue, except some nights when they were green. The time was 1883, the year an Indonesian volcano named Krakatoa exploded. Scientists liken the blast to a 100-megaton nuclear bomb. Fully 600 km away, people heard the noise as loud as a cannon shot. Plumes of ash rose to the very top of Earth’s atmosphere. And the moon turned blue. Krakatoa’s ash is the reason. Some of the ash-clouds were filled with particles about 1 micron (one millionth of a meter) wide–the right size to strongly scatter red light, while allowing other colors to pass. White moonbeams shining through the clouds emerged blue, and sometimes green.

Blue moons have capture the attention people for years… in songs, art, movie, and yes, the beer. Becky Tanner from the Associated Press wrote, “During the midst of the Great Depression in 1934, Richard Rodgers and Lorenz Hart wrote this song…

Blue moon, you saw me standing alone,
Without a dream in my heart,
Without a love of my own.
Blue moon, you knew just what I was there for,
You heard me saying a prayer for
Someone I really could care for.

This is all well and good… unless you’re a seven year old who wants to see a blue moon. To solve the problem, my oldest (11 years old) ran downstairs and grabbed a pair of 3D glasses (the ones with the blue and red lenses) and told his brother to put on the glasses and look at the moon.

“Close your right eye and you’ll see a blue moon,” the oldest explained.

“Oh, now I see the blue moon.” And just like that, the problem was solved. If only everything was that easy.