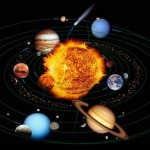 Someday you might be invited to compete on Jepoardy and you’ll thank our trust blog contributors for this nerdy information. Did you know that a musician named Gustav Holst was so fascinated by astronomy that he wrote several pieces of classical music about planets? In fact, he wrote music for all of the planets except Earth and Pluto. Why was Pluto excluded? Holst wrote The Planets in 1918, before Pluto was discovered!

Remember, the planets were all named for ancient gods and goddesses, so when it was time for Holst to title his music about the planets, he chose titles that reminded people of the god or goddess for whom the planet was named.