The International Space Station is the third brightest object in the sky (after the sun and moon) – it can be seen without a telescope by the naked eye.

The ISS is even visible when spotted over a city and flies over about 90 percent of the Earth’s population. 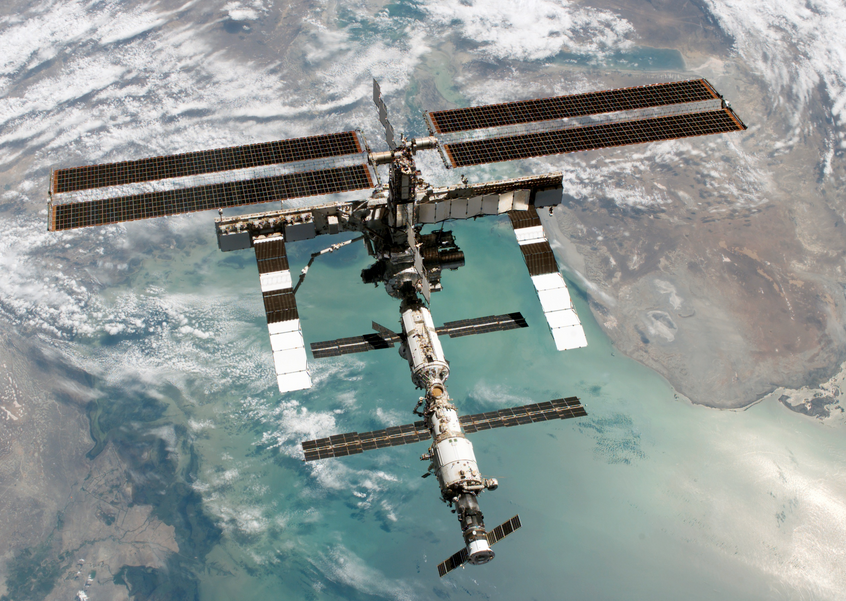 Backdropped against the Caspian Sea, this full view of the international space station was photographed by a crew member onboard the Space Shuttle Discovery after the undocking of the two spacecraft. Image credit: NASA

How do you know when to look up?

NASA is now offering a Spot the Station service. This provides a list of upcoming opportunities to spot the ISS from thousands of world locations. You can also sign up to receive an email or a message on your cell phone when it’s overhead. You will only receive alerts during prime viewing opportune times, like only when the station is high enough over the horizon and in view long enough. NASA believes most will receive alerts a few times a week to a few times a month.

The ISS looks like a fast moving airplane but is much higher and travels thousands of miles an hour faster. It orbits the Earth every 90 minutes.

The station is about the size of a football field and has more livable space than a six-bedroom house, including two bathrooms, a gym and a 360-degree bay window.

Here are some facts about the ISS, courtesy of NASA –

The International Space Station is not only an orbiting laboratory, but also a space port for a variety of international spacecraft. As of June 2013, there have been:

NASA Bombs the Moon – Collision Easy to See
3D Printing: The End of Manual Labor?
Folklore or Science… Is a Blue Moon Really Blue?
Space Camp Science – Build Your Own PVC Rocket Launcher
Earth's Sunset is Spectacular but Not Rare from Space
Astronomers Set to Study Huge Asteroid as it Passes Close to the Earth
0 replies