Grab your camera and a snack, the night sky will put on a spectacular show throughout March.

The comet, Pan-STARRS is visible without a telescope and will make regular appearances in the Northern Hemisphere throughout the month. It was named after the Hawaiian telescope (Panoramic Survey Telescope and Rapid Response System) where it was discovered in 2011.

It is believed that it will take more than 100 million years to make a single orbit around the sun. 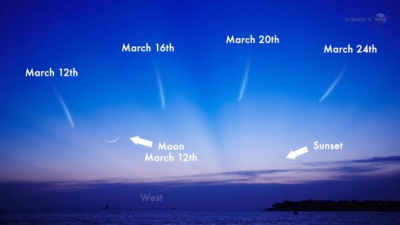 Officially known as C/2011 L4, Pan-STARRS has brightened as the sun’s hot wind melts it, forming a long tail. On March 5th, it traveled its closest to Earth, getting about as close to our planet as the distance between us and the sun.

Pan-STARRS made its first appearance in the Northern Hemisphere on March 7th, but has been difficult to spot due to its low position in the sky. As of March 12th, the comet’s position is higher and the thin, dark crescent moon will help.

It will be visible in the night sky into April.

How to See the Comet

Pan-STARRS will be visible to the naked eye but a good pair of binoculars or amateur telescope will help. On a cloudless night, look to the western sky about an half hour after sunset. The sky will still be light.

Find the moon. This sounds easy, but it may be more difficult than you think. The crescent moon will only be about 1% illuminated with its sliver looking like a thin smile.

Your search may need to start with binoculars. Once you know what you are looking for, you can locate it with your naked eye.

Pan-STARRS will look like a bright star with a stubby tail extending upwards and to the left.

The moon and comet will only be visible for about a half an hour before they disappear into the horizon.

Pan-STARRS is not the only comet making a visit to our night sky. Comet Lemmon is currently visible to skywatchers in the Southern Hemisphere.

Comet ISON was discovered in 2012 and will be visible in the Northern Hemisphere in November. It will pass within 800,000 miles (1.2 million km) from the sun and could be spectacular to view. But NASA astronomers warn it may also be a dud.

Astronomers Set to Study Huge Asteroid as it Passes Close to the Earth
Look Up! The Night Sky is Full of Awesome!
Annular Solar Eclipse This Weekend – Share Your Photos With Us
Alex… Astronomy and Music For $200
0 replies

Sink or Swim – What Happens When You Weaken the Hydrogen Bonds in Wat... Melt It, Blow It Up, Smash It But Don't Eat It – New Book Shares...
Scroll to top
Create a new list