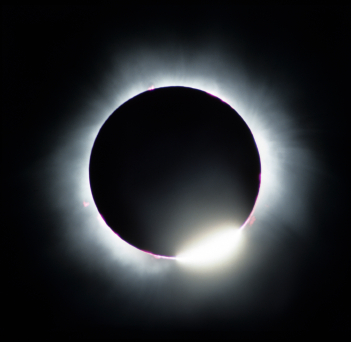 Don’t fear the werewolves and vampires this weekend. An annular eclipse will make it’s way across the western United States.

This Sunday, May 20th in the late afternoon, an annular eclipse of the sun will be visible to the United States and a narrow path across the northern Hemisphere. A partial eclipse will be visible in East Asia, the North Pacific, North America and Greenland.

Solar eclipses happen all over the globe all the time, but this will be the first in the continental U.S. in more than 18 years.

An annular eclipse is a “ring of fire” solar eclipse. A total eclipse is when the moon’s shadow completely covers the sun and makes it dark during the day. This eclipse will cover about 85% of the sun leaving a visible ring.

If you want to see it, set a reminder, because it won’t last long. The eclipse will be visible first along Oregon and northern California at 1:23 p.m. local time. It will last 4 1/2 minutes as it tracks across the U.S. to Redding, CA, to Central Nevada, southern Utah and northern Arizona to Texas. People in the eastern U.S. will see the sun as a thin sliver in the afternoon hours but will end by the time it reaches the East Coast.

National Parks in the west have scheduled eclipse viewing events. This will allow for some spectacular photo opportunities.

I have always been fascinated with eclipses. The last solar eclipse I remember, I was in elementary school and we went out on the playground with our makeshift paper viewers. One of my favorite books as a child was “Who is Eating the Sun?” I have read that book to my children, and for the first time, they will be able to experience what we have learned about only in books.

How do you view the eclipse without burning your eyeballs?

Regular sunglasses won’t give the protection needed. Without special glasses, don’t look at the eclipse for more than a fraction of time. You won’t burn your eyes from dangerous solar radiation only visible during eclipses. The damage comes from staring at a solar event like this for a long period of time. To protect your eyes, many astronomy shops and National Park gift shops will have cardboard glasses that offer protection from the UV and visible light. Or go geek and use the highest grade of welding goggles. They will also protect your eyes.

Don’t look at the eclipse through your camera. You may want to use a solar filter to protect both your eyes and your lens.

You can make your own pinhole camera by poking a hole into an index card or other stiff paper. Focus the sun’s image onto another card through the pinhole. You can watch the eclipse progression without damaging your eyes. I’ve never had much luck at this technique. You can also check out the Exploratorium in San Francisco to learn how to make a pinhole camera with a Pringles can.

If you aren’t located in the right spot, or there are clouds in your area, like they are forecasted in Denver, you can also watch the eclipse online or from the space station. Space.com will host a live stream of the solar event.

We’d love to see your photos, taken with caution and no eyeball burning. Leave us a photo on our Facebook page, Tweet us @SpanglerScience or mention us on Pinterest. We’ll feature some of the best next week on our blog.

Bubble Bubble on the Wall, Who's the Squarest of Them All? Colorado Destination Imagination Team Heads to National Competition
Scroll to top
Create a new list