There are crinoid stems everywhere; they were once so prolific they covered the bottom of the sea like a crop of wheat! The Midwest was once part of a great prehistoric sea, and where there is a sea, there are sea creatures. Where there WAS a sea, there are sea creature fossils. And limestone, which is a sedimentary rock made up, mostly, of calcium-rich fragments of ancient sea animal skeletons, specifically crinoids. 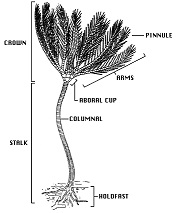 Crinoids are often called “sea lilies” because of their resemblance to an underwater flower.  Crinoids were not plants, however; crinoids were animals.  Madeleine L’Engle wrote about farandolae in A Wind in the Door, and her character Sporos and his fellows were meant to resemble crinoids.  Literature and science!

There are still some types of crinoids, but it’s the extinct crinoids that 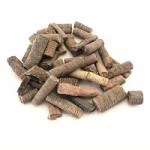 we’ll be talking about here.  If you live in the Midwest, you already know what part of an ancient crinoid looked like because you probably had a pile of crinoid stems

somewhere in your bedroom, and a necklace of threaded crinoid “coins” around your neck in the summertime.  (If you ever hear of or see a necklace or rosary threaded with St. Cuthbert’s beads, you’re looking at crinoids!)  (Sometimes crinoid stems and coins are called Indian Beads, but that’s very misleading, even though some  Native Americans did use crinoid stems and coins to make jewelry.)

If you have access to a lapidary (rock tumbler), crinoids shine up beautifully!  They can be painted, too!

Don’t forget that there are still crinoids in the ocean; they’re echinoderms, like starfish and sea urchins.

The ancient, now-extinct crinoids are seldom found as an intact fossil 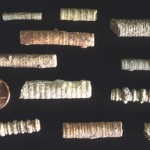 – the arms were too fragile and the pieces were scattered by ocean currents.  But the stalk, or stem, can be found, fossilized, all over the Midwest.  In fact, it’s the state fossil of Missouri!

The next time you’re walking by a creek or stream, take off your shoes and wade right in there.  You’ll probably feel the crinoid stems under your feet.  Start a collection.  If you look really closely, you might even find a fossil imprint of an intact crinoid!

Take a walk outside.  Look around at all the stone.  Imagine what the land where you are standing might have looked like a million years ago.  Everything you see today is here now because of what was there then.

The Science Behind Sinkholes

The Work of Scientists: Reasons to Read and Write

Blast Back to School with End of Summer Fun! Backyard Archaeology
Scroll to top
Create a new list