There is genuine archaeology in your back yard; you don’t have to travel to Greece, or Pompeii, or the La Brea Tar Pits to discover archaeological artifacts and fossils, you know.  More often than you think, these things (maybe not the dinosaur bones, but you never know!) can be found in the back yard.  Let’s talk about artifacts first and save the fossils for next time. 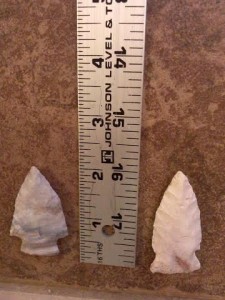 These two arrowheads, for example, were found by my husband and my son on two different occasions as they plowed and planted our garden. Arrowheads and spearheads will often turn up when the earth is turned up!

We lived out in the country in a big house that sat well off the road, and every year we had to buy a huge load 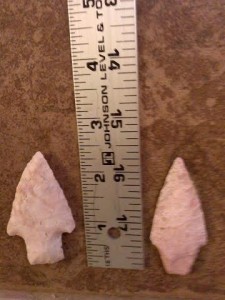 of limestone gravel. After the gravel was spread over the quarter-mile driveway, the excited search began. Almost without fail, at least one arrowhead would turn up in the load. Finding it kept my two children busy for at least three days, and while they almost always found at least one, sometimes there were as many as six or seven.  The arrowheads were often chipped or broken, but there were always enough intact ones to make the search thrilling.

What my family liked best, though, was walking through the woods behind our house and glancing down to see a spearhead.  This didn’t happen often, but it happened often enough that even today, we all walk through the woods with our eyes on the ground.  Of course, this is also how people here find morel mushrooms in season, so, you know, double coolness. 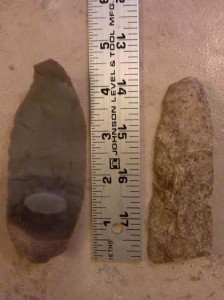 As are most lessons if they’re done right.