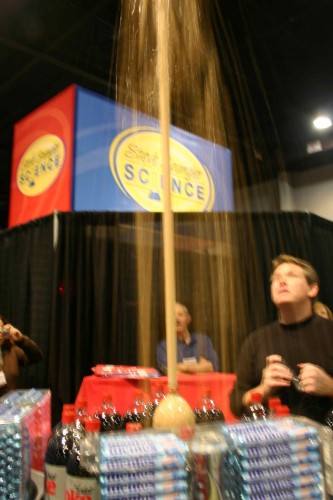 The Mentos Geyser made history once again as the star attraction at the NAEYC 2006 Conference in Atlanta, Georgia. Over the rumble of the crowd in the exhibit hall, you could hear someone from the Spangler Science booth yell, “GEYSER!” followed by a few screams and cheers of excitement. The “geyser” was actually the eruption of a two-liter bottle of Diet Coke powered by Mentos. As soon as people approached the booth and saw the mountain of soda and the display of Mentos, they knew what could happen… but most people didn’t believe that we would actually launch the geysers from behind the booth. Surprise!

Instead of just launching the Diet Coke just for fun sake, we used each opportunity to deliver a quick science lesson and followed it up by putting one of our Geyser Tube Experiments in each of the teacher’s hands. Out of the 11,000 people reported to be in attendance at the event, we personally handed out 7,000 Geyser Tube Experiments (which included a roll of Mentos). We even had a few guest “geyserists” take center stage in the booth and try their hand at a launch.

This is not the first time these educators had seen or performed our Mentos Geyser which was featured on stage three years ago in Anaheim, California at the 2003 NAEYC Conference. One teacher commented, “We’ve been doing this experiment for the past three years, and it took the rest of the world this long to catch up!”

Thanks to our partnership with Perfetti Van Melle, the people who make Mentos candy, each teacher who visited the exhibit received a free Mentos Geyser Tube experiment which included a roll of Mentos, the launching tube and instructions to explain the science behind all of the fun.

Pete Healy, Vice President of Marketing for Perfetti Van Melle, commented on the interactive aspect of the geyser experiment.

Coke.com is running a contest through the end of the year called Poetry in Motion, celebrating the fun and beauty of everyday things used in unexpected ways – just like the popular Mentos and Diet Coke demonstrations on the internet. Teachers are encouraged to post their creative class projects on coke.com.

Creating Unforgettable Learning Experiences
Steve Takes Science on the Road to Local Sacramento Television Station
Make $1000 writing a lesson plan… JUST DO IT!
Staff Spotlight on Copy Editor Debbie Leibold
Join Steve Spangler and Kathy Sabine for Weather and Science Day 2012 at Coors Field
Not Your Typical Mentos Geyser Video
Teachers Save 20% – Thanks for All You Do in the Education of Our Children
Ellen DeGeneres Wants Giant Smoke Rings!
0 replies

Mentos and Soda Mix – An Erupting Business The Mentos Question on Who Wants to be a Millionaire?
Scroll to top
Create a new list