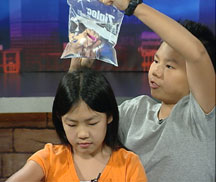 About six months ago, 12-year-old Harry Lee contacted me via email. He said he found the “Spangler Science” section on 9NEWS.com and started his own science club in Indonesia. Harry watches the experiments on his computer and then re-creates the fun with his club. Over the past few months, Harry and I have exchanged emails and even talked on the phone – I could tell that there was something special about this young man… he was amazing.

I received a call 3 weeks ago from Harry – he was attending the Summer Institute for the Gifted (SIG) at Amherst. I told Harry that I’d love to see him if he ever makes his was to Colorado. The phone rang later that night… it was Harry Lee. “My parents would like us to meet… so I’m coming to Colorado on August 29th.” WOW! I told Harry that I’d like to have him as a guest on 9NEWS to do one of his favorite experiments.

Today, I meet the Lee’s for lunch – Harry, his sister Alexandra and his parents Lilly and Keat – and I know I understand why they say, “Great kids pick great parents”. After spending the afternoon together, I know that the world will be a little better off someday because of Harry, Alexandra and the Lee family.

Watch Harry and Alexandra amaze you by viewing the video on this page.