Jeff Bush, 36, was killed last Thursday when a sinkhole opened up under his house and engulfed him and his bedroom in Seffner, Florida. Authorities began demolishing the house to get a look at the sinkhole. The house itself was too unstable to enter.

Crews worked carefully to save some of Bush’s belongings while also figuring out how to stabilize and fill the hole, which is estimated to be about 30 feet wide and 60 feet deep. The hole is so unstable that nearby houses are also in danger and have been evacuated.

Visit NBCNews.com for breaking news, world news, and news about the economy

How does a sinkhole like this form, especially under a house? How do you know if your house is sitting on top of a potential sinkhole?

We usually see sinkholes on the news when they open up in a roadway and swallow nearby trees or passing cars. Sinkholes, or sinks, mysteriously appear all across the United States, but are mostly found in Florida, Alabama, Kentucky, Missouri, Pennsylvania, Tennessee and Texas. They usually form in areas with soft bedrock or marshy terrains.

Areas where the bedrock is made up of soft minerals and rocks like salt, gypsum, limestone or dolomite are most susceptible. Groundwater running through the rock begins to erode it. Caverns and spaces are created by the eroded rock washing away. The land on top stays intact until the underground space becomes too large, causing the surface to collapse. 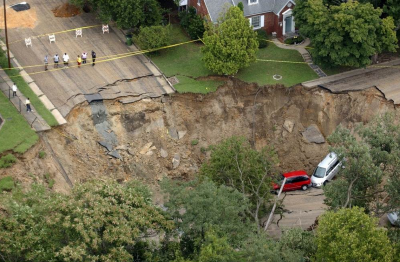 Sinkholes usually form where the land does not have good surface drainage. During rains, the water soaks into the ground and stays in the cavern. When the water travels to another location, the land above may not be able to sustain the weight and will collapse.

Humans can also be responsible for sinkholes. Pumping groundwater in construction and development plans may open up weakened areas in the ground. When water is diverted or drainage patterns are changed, sinkholes can also form. If the land is altered, the weight of new material may shift the land and a sinkhole can open up.

For more on sinkholes and facts that could save your life, visit Live Science.

Back Yard Geology: Crinoid Stems
The Work of Scientists: Reasons to Read and Write
1 reply