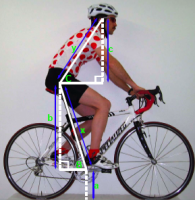 The Colorado State science fair judges were not the only ones who were impressed with Raleigh Burt, an 8th grader from Sargent Junior High School in Alamosa, Colorado. His first place, award-winning project caught the attention of many people who often wondered if they really needed to wear a bicycle helmet. After recording a podcast interview with Raleigh several weeks ago, I invited him to join me on 9News 4 O’Clock Show to demonstrate his ingenious contraption in person. Raleigh agreed to share his project write-up on-line to give people a chance to see the research and data behind his conclusion.

Download Dangerous Decision: The Consideration For Helmet Use At Any Speed (1.1 MB)

The project grabs your attention from the opening lines…

Would you voluntarily run at a full sprint headfirst into a brick wall? Now, think of sitting on a bicycle without a helmet, and then tip over with a little over a second to intervene before your bare head hits the ground. Which sounds worse? Despite the fact that bicycle helmets are considered the single best means of protecting cyclists from the leading causes of head injuries and death, many people still choose not to wear them stating that: “I don’t ride fast enough to need a helmet.”? That is the choice many riders make to become one of the 67,000 cyclists who will suffer a head injury this year. From the height of a recreational riding position, a simple tip-over fall can
create enough speed and energy to cause substantial damage to the human head and brain. In other words, it is the height of the potential fall and not just the speed the cyclist is traveling where the threat of injury exists.

Raleigh Burt was the 2005 Junior Division Best Individual Project Winner. If you want to know what it really takes to be a state champion, you owe it to yourself to download his full report. Oh, by the way, it doesn’t matter how fast you’re riding your bike… wear your helmet.