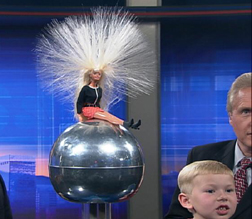 Don’t worry… Jack is fine but he sure got the attention of a few hundred thousand viewers on KUSA-TV when he joined me for a science segment on lightning safety . Barbie took the majority of the torture as 400,000 volts of static electricity turned out to be a hair-raising experience. See the video