I want to thank the 18,950 people who cast their votes for yours truly in the TIME Magazine Poll for the Top 100 Most Influential People of 2007. As I mentioned in a previous post, I was stunned when an editor from the magazine called me about the nomination on April 19th. The editors of TIME encouraged readers to help them narrow their choice down from 204 nominees to the top 100. I wish that there was a way to thank all of you who took the time to share your comments with the TIME readers. I’m honored by your kind words… but it’s really a reflection of all of our efforts to get kids excited about science.

Let me try to answer the most asked question… If you placed 18th in the poll, why aren’t you in the magazine? I’m told that the magazine is different than the on-line poll. The editors at TIME select the Top 100 on their own while the reader’s cast their own votes (which is a really good thing if you look at the amazing people who are in the magazine). Listen, I’m just thrilled (and amazed) to be included on the nomination list let alone find some way to finish up at #18 on the readers choice poll… thanks to you. I’m honored.

A special thank you to Al Lewis for his article in the Denver Post. 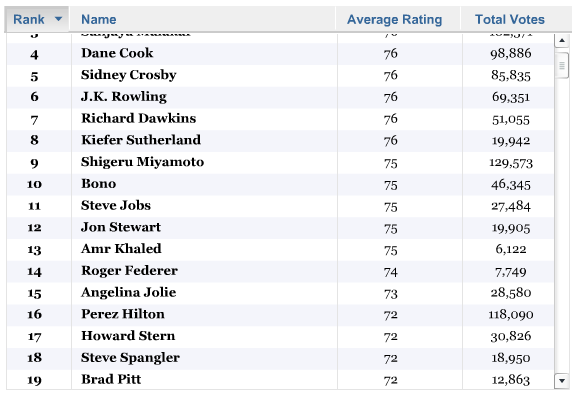 Television’s “Who Wants to be a Millionaire” Called Today…
Sign-up for the Experiment of the Week
Emelie Earns Extra Credit in Science With 100% Recycled Birdhouse!
Insta-Snow Makes CHS Snowmakers Famous
Playing with Bubble Wrap Could Make You $10,000
Science "Left Behind" in American Schools
Science in a Microwave Oven
Celebrating Connections 2006 – West Virginia
3 replies

Scavenger Hunt – Could This Be What You're Looking For? Young Rocket Scientists Inspired by Homer Hickam
Scroll to top
Create a new list