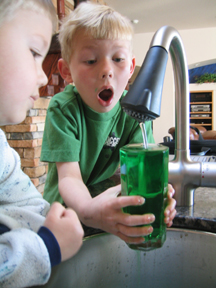 I will never forget St. Patrick’s Day 2006. This morning I woke to the screams of our almost four year old twins, Mark and Scott.

“Daddy, wake up! Look at what those Leprechauns did,” yelled Scott. I jumped out of bed to find the twins picking up green and gold coins that peppered the living room floor. Traces of gold dust covered the counter top, and a glass of water that was left next to the sink was now green. By this time, our seven year old, Jack, was scouring the house in search of more evidence of Leprechauns.

“Mom! Dad! Bring the boys here. Look at what I found in the toilet,” screamed Jack.

You guessed it… the toilet water was green. This was sufficient evidence for the twins that our home had been visited by Leprechauns – they took the bait hook, line and sinker. As I glanced over at Jack, I could see his wheels were spinning. While he never said anything out loud, his facial expression told me that he wasn’t buying this whole Leprechaun thing.

“What do you think about those Leprechauns?” I asked. “Oh, it’s pretty cool,” Jack replied. Then he whispered to me, “Daddy… I kind of know that Mommy just colored the water with food coloring.”

For the first time as a parent I felt his disappointment. He wanted so badly to believe, but his ability to think and reason was getting in the way of him believing in Leprechauns. My little boy was growing up – figuring things out – becoming wise to the ways of the world. In the mean time, Jack’s brothers were caught up in the frenzy, searching each toilet and sink for more green water. In a split second I had to respond. “Jack, you’re probably right. But let’s keep it our little secret… deal?” 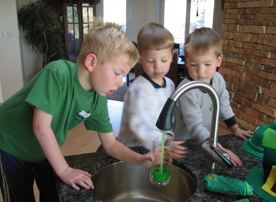 Jack seemed fine with the deal, but his face told a different story. The magic was gone. I walked Jack over to the kitchen sink and handed him an empty glass. “If Leprechauns were real, the water coming out of the faucet would be green,” I said, with a sense of defiance in my voice. Just then I turned on the faucet and the water began to flow… and it was green!

“Oh my gosh! Daddy! It’s green! Mommy, come here… right now! Mark, Scott, get over here!” This time the screams of excitement were real. “Mommy, the Leprechauns are real. They really colored our water. Look at this…” A wonder sense of fun filled the house as the boys ran from faucet to faucet to check the water supply. In each case, the water came out green.

Call me sappy, but I could feel the hair on the back of my neck stand up as I looked over at Mommy who was holding the glass of green water. “The water came out green,” Renee said, with a smirk on her face. “I know the Leprechauns must have visited last night.” But there’s more …

It’s probably best that you stop reading this if you’re one of those people who wants to believe.

But if you want to know how we made the water turn green, keep reading. The secret is nothing more than a few coloring tablets secretly hidden in the screen of the faucet. The tablets are called Fizzy Tablets or True Color Tablets. You can find them on-line or occasionally at a department store. Don’t use Easter egg dye tablets because they stain! 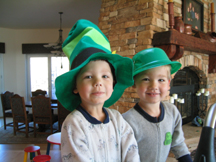 When you turn on the water, the tablets dissolve and color the water. Remember that it only lasts for a short time before the coloring tablets completely dissolve, and the color is the most vivid during the first few seconds. Be sure to collect a sample in a cup to prove that it really happened!

It’s amazing to me that something so small and easy to do can make a memory as unforgettable as this. I hope the Leprechauns find their way to your home.