A few days ago, I bought some tomatoes at the grocery store.  They were on-the-vine tomatoes, so it’s safe to assume that all of them were about the same age. 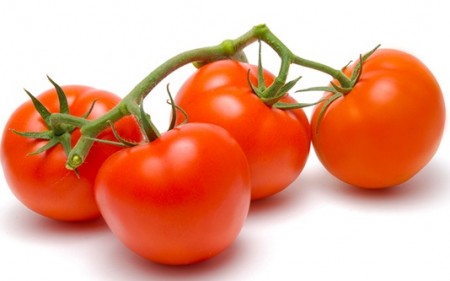 I assumed these were quadruplet tomatoes – all the same age!

Mom told me to never keep tomatoes in the refrigerator. She said cold tomatoes lost their flavor quickly, and that tomatoes should be kept on the windowsill or on the kitchen counter. She also claims that tomatoes should be stored upside-down so the flavor is evenly distributed. I’m sure that’s true because it’s my mom saying so, but I’m not sure how that one works. But I do it anyway.

Two days ago, I selected one of these very nice-looking tomatoes at random and cut a slice off the top.  This is the sight that greeted me. 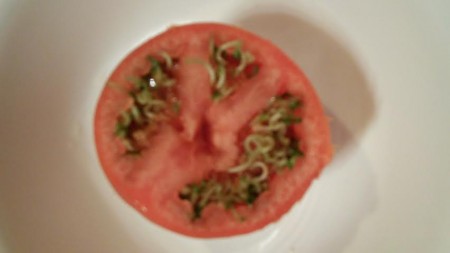 I thought those were worms at first!

I was so startled; this was NOT what I expected to see when I sliced open that outwardly attractive tomato!  What WERE those creepy squiggly things?  Were they worms?  Had I purchased a wormy tomato?

A closer look told me that I had not purchased a wormy tomato; I had, however, purchased a tomato with a little well-preserved age on it, and the two days upside-down on my kitchen counter had added to the aging process in a rather unique way.

Instead of getting mushy, like most tomatoes would do after a few days, this tomato got fertile.

A tomato is, biologically, a fruit, since its seeds are on on the inside, and those seeds had germinated.  When this happens, it’s called Vivipary, which is Latin for “live birth”  My tomato, meant for salad, was experiencing live birth.

Check out my Viviparious tomato today.  The sprouts, still watery but now with room to grow tall, are doing just that. 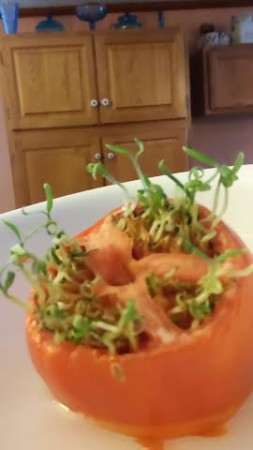 I looked up this phenomenon on the internet and discovered that it’s not really a phenomenon at all; it’s quite common.  It’s just that most people will say “GROSS!” and throw the sprouted tomato away, rather than put it in water and take pictures of it.  And maybe plan to separate the seedlings and plant them when spring finally arrives.  And probably serve the resultant fruit to unwary friends and family and not tell them the origin until they’re already eaten them.

Of course, my family and friends would probably think it was really cool, which, of course, it is.

Be aware that any tomatoes you do get from a Viviparious tomato will probably not be the same kind of tomato you bought, since commercially grown tomatoes are usually hybrids, but there is no reason your tomatoes won’t be real tomatoes, and they’ll probably taste great.

Know, too, that “Vivipary” is not a kind of tomato, like Brandywine; Vivipary is merely the name for the germination-inside-the-fruit process.

But their Viviparious sister?  If all goes well, she will live on and on.

Come on over for dinner.  Care for some salad?  It’s, um, home-grown.