JoAnna Cobb is a math teacher in southern Indiana by day, but by night, she creates glowing snow monsters! 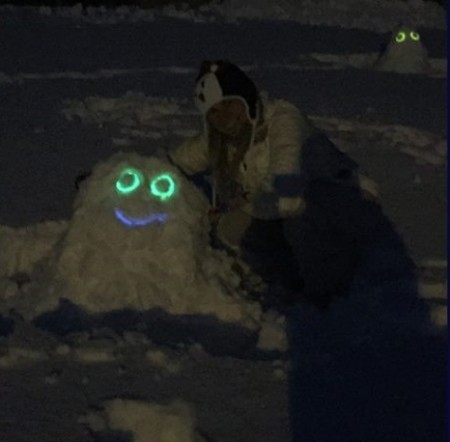 Mrs. Cobb and one of her Snow Monsters

Mrs. Cobb is an excellent teacher who likes to make her math classes as interesting as possible – she’s been known to use some Spangler Science, in fact!

But during this long snow day after snow day week, Mrs. Cobb and her mom decided to be innovative with their snow creations.  Some inexpensive glow in the dark bracelets  and some snow-rolling later, and the Cobb lawn was covered with creepy snow creatures with glow-in-the-dark eyes and a scary, smiley mouth!  (At least Mr. Cobb won’t have to mow for a while!)

Did I mention that Mrs. Cobb’s mother came over and helped cover the lawn with monsters?  Proof: 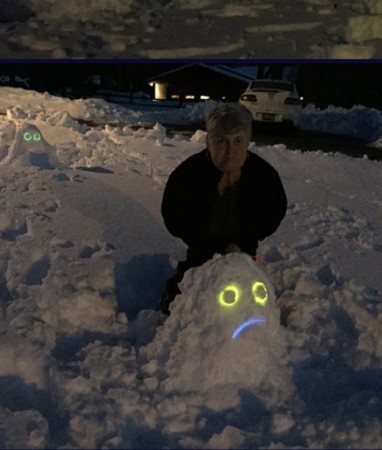 Mrs. Hackney, you’ve definitely done a good job raising your daughter.  I think we know where she got her creative streak, too!

If you’re passing the Cobb lawn and see a swarm of glowing-eyed snow monsters, don’t be afraid.  They’re friendly.

I think.  Well, what do YOU think?

Maybe I’ll wait until daylight to drop in, Mrs. Cobb.

Science isn’t always about labs and test tubes and chemicals, you know.  A lab is any place where experiments are being performed, and a snowy yard where people are experimenting with glow-in-the-dark faces on snow monsters is definitely a lab.  Every classroom is a lab.  Every kitchen is a lab.  Yes, every classroom, and every kitchen.  Any place wherein people are laboring in some way is a LABORatory.   Working in your yard?  You’re working in a lab.  You’re LABORING, aren’t you?

Mrs. Cobb’s yard was definitely turned into a laboratory this week.  She didn’t know how the Glow Bracelets would work until she experimented, did she?