When I was growing up, my school did not do a science fair. I had never been to a science fair until my oldest was in kindergarten. All I knew was it had something to do with baking soda volcanoes.

Fast forward several years, and I now organize the science fair and encourage kids to get involved. Through Steve Spangler Science, I also help parents, teachers and students with their projects. Science fair and volcanoes may go hand in hand, but the ever popular demonstration is not actually a science fair project.

A science fair project asks a “what if” question, which leads to a variable and eventually finding an answer or at the very least, a big discovery. A science demonstration, like our volcano, is used to illustrate a science concept.

Another extremely popular demonstration is quickly taking over the volcano as a classic science fair project – dropping Mentos into Diet Coke. This is also a demonstration.

Let’s take the three C’s and apply them to the Mentos and Diet Coke demonstration. We know Diet Coke works well with Mentos to produce a soda geyser, but what about other sodas? Do you get the same reaction with root beer? Or what about regular Coke? In this project, we are going to ask the question, “What if I change the type of soda?” 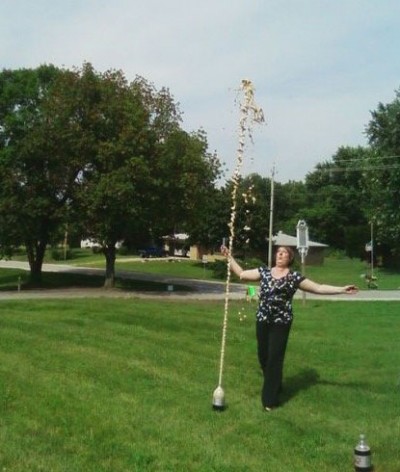 We now have our first C – Change. The type of soda will change. That will be our variable. The variable is something that changes in the experiment.

Now, we can move on to our second C – Create. Our experiment will test different types of soda with Mentos. Let’s pick root beer, Sprite and regular Coke. We will also have a bottle of Diet Coke as our control. A control is where the variable does not change. We know Diet Coke works and we are testing the other sodas against it. Nothing else in the experiment will change. We will use the same size of soda, same number of Mentos, same temperature, etc.

The last C – Compare. As you run your experiment and test the different sodas, note the dependent variable – how high each soda shoots in the air. Which one went the highest? The lowest? How do they each compare to the control’s height?

Dropping the Mentos into the Diet Coke and shooting soda all over the science fair is not a project. Applying the three C’s to the demonstration to make a discovery IS a science fair project.

You can apply the three C’s to any demonstration to turn it into a project, including the volcanoes. Start with finding one variable to change and you are on your way.

Remembering Mr. Wizard – A True Inspiration
Science Fair Judging – Why Didn’t I Win?
The Mentos Question on Who Wants to be a Millionaire?
Atlanta Science Boot Camp – Teachers Get Marching Orders
A First Look at the Geyser Tube
Carnival of Education: Teacher Appreciation!
Quirkles Co-creator Demonstrates Cornstarch and Water Experiment
Mentos Geyser Hits the Classroom… But Some Teachers Don’t Get It
5 replies

Science Sisters Light Up a Homemade Laboratory and Bring Science to Life The Republican Candidates' Views on Education – Should We Do Away...
Scroll to top
Create a new list