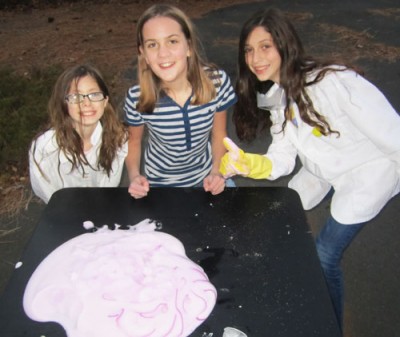 Sisters Keira and Shaylie are student scientists with a real knack for chemistry. They live in Bend, Oregon and along with friend Caroline, have turned a bathroom in their home as well as a playroom into science labs.

We had the pleasure of learning about these exceptional girls around the holidays. They had a regular Christmas wish list and a second, Steve Spangler Science wish list. After watching some of their experiment videos and hearing about their scientific discoveries in their homemade lab, in their driveway and in the dark, we had to share their amazing talent and zest for learning.

Keira, 12, is described by her dad as a “very studious child.” She was placed in a TAG (Talented and Gifted) program by her kindergarten teacher. Over the years, science has become her favorite subject. Her best friend Caroline, 11, helps with the science activities.

Sister Shaylie, 9, is more of an inventor and sometimes the assistant when the girls perform experiments in their lab.

Keira says she and Caroline really got into science in 5th grade when their class took a field trip to a local science laboratory to learn about magnets. During the visit, they were “kind of interested” until they made something that used magnets and copper wire. A short piece of wire would spin when placed in-between the other two pieces of wire and the magnet. 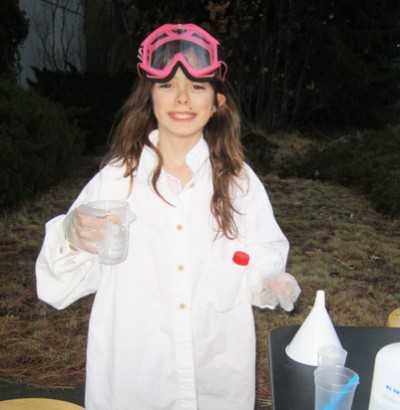 The girls were hooked and decided they could make their own inventions and test their own experiments in their own lab. So they built a lab in an upstairs playroom.

Their chemicals are kept in the bathroom next to their lab. The sink is used for experiments and supplies are stored in the cabinets.

The girls say their favorite science is chemistry. With their lab, they have created all kinds of explosions (yikes!) and reactions. Their favorites are Exploding Snow (a Water Gel, vinegar, baking soda and more mixture) and Gluepyoo ( a gooey mixture with Sodium Alginate). They like to experiment with different chemicals to “improve” upon their fizzes and concoctions, going beyond what was in the kit.

They practice safe science in their lab and take precautions.

Keira logs each and every experiment that the girls work on, logging who was involved, what they did and results found. She also brings some of the best experiments to her science class at school. Her favorite teacher is her science teacher, imagine that.

Caroline and Keira watched Steve Spangler during one of his appearances on The Ellen DeGeneres Show, and say they have been addicted to his experiments ever since. 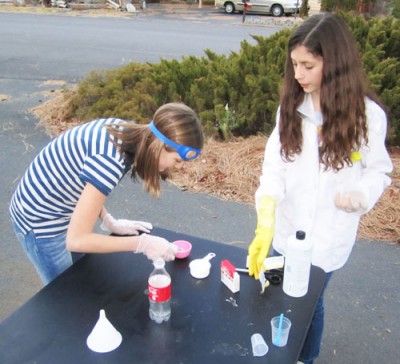 Keira is a true scientist with an array of future experiments, ideas, periodical tables, etc. posted on her walls. She reminds me of Flynt Lockwood in Cloudy with a Chance of Meatballs. She even wears a lab coat like Flynt. Maybe someday Keira, Caroline and Shaylie will invent their own FLDSMDFR (Flint Lockwood Diatonic Super Mutating Dynamic Food Replicator).

I only wish I was as together as these young women are at that age. Watch out world, these three girls are intelligent, creative and motivated. One of their discoveries or inventions might just save us all someday.