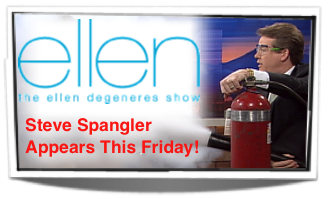 It’s official… I’m flying out to be a guest on the Ellen DeGeneres Show next week. Back in April of 2006 when a producer on the show originally contacted our office, I asked for your suggestions on experiments to do with Ellen. Lots of people suggested my Smoke Rings demo and Ellen might have taken your suggestion (hint, hint). Let’s just say that our office was filled with lots of smoke today as someone practiced shooting cups off of everyone’s head. We’re told that the air date will be next Friday, September 21, 2007. More to come.

A Look Inside Our Lab on Modern Marvels Preparing for Ellen… What to do?
Scroll to top
Create a new list