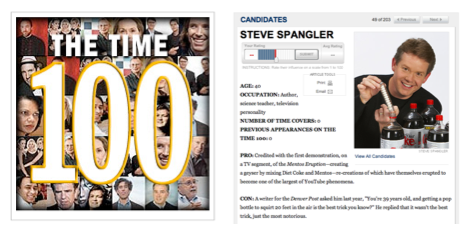 I was on my way home from presenting a week of science seminars for teachers in California when I got a call from my office. Jeff Brooks explained that an editor from TIME Magazine called and wanted some pictures to run on the website. I laughed and asked how it felt to be pranked by my brother. The next call to my cell phone was from an editor himself who explained that he needed some pictures right away. The conversation was somewhat one-sided because I wasn’t sure what to say… other than ‘thank you’.

I’m posting this as a way of saying thank you to all of the people who have been kind enough to vote and to post comments on the time.com site. My inbox has lots of emails with screen captures of the top votes – never in my life will my name appear on the same list as Bono, George Bush, Al Gore and Howard Stern! This is all thanks to teachers and friends who spread the news on Friday, I’m sure. I told everyone in our office that there are 203 people on the TIME list and soon my name will appear on the bottom of the list, but it’s an incredible honor (truly unbelievable) to even be included.

Here are the final results… #18

Science in Our Heads
Make $1000 writing a lesson plan… JUST DO IT!
Launching Potatoes on the Morning Show
Playing with Bubble Wrap Could Make You $10,000
Television’s “Who Wants to be a Millionaire” Called Today…
We Hit the Target with Science
No Need to Hire Americans – A Wake-up Call to all Parents
Science in a Microwave Oven
211 replies