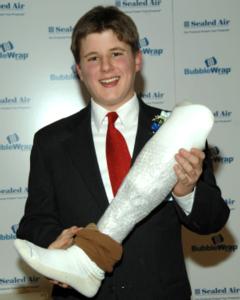 Listen to the Interview

During our phone call this morning, Cynthia Palmer said, “We’ve got the Today Show here… lots of people are calling… and we’re so proud and excited. Grayson not only won a contest, but he came up with something that will change people’s lives. Who says having fun is not important?!”

The 15-year-old student from Franklin Road Academy in Nashville, Tennessee used Bubble Wrap brand packing material to develop a cost-effective cosmetic skin covering for prosthetic limbs. Later this year, Grayson will visit Ghana with his parents to fit some patients with his low-cost invention.

Grayson’s mother, Gracie Rosenberger, lost her legs as the result of injuries suffered in a 1983 traffic accident. Instead of allowing that to defeat her, she and husband Peter founded Standing With Hope, a ministry that reaches out in music and prayer to amputees. They recently expanded outside the U.S. to a clinic in Ghana, where prosthetic legs are custom-built for the poor.

You can listen to my interview with Grayson by clicking on the link below or read the story at the tennessean.com.

Listen to the Interview