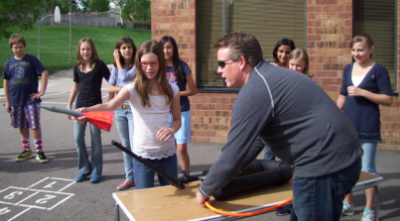 The 4th graders at Willow Creek Elementary and their amazing teacher, Lisa Heaton, took a lesson out of the books, literally, and tested their rocket-building skills.

They read Homer Hickam’s book, Rocket Boys. Then they set out on their own to design and build a rocket out of construction paper, tape and clay. That’s it. No engines or explosives helped launch these rockets into the air. They simply used air pressure.

I first learned how to make the PVC Rocket Launcher several years ago while speaking to teachers at Space Camp for Educators in Huntsville, Alabama. This hands-on rocket activity is an extension of the normal space unit that is standard at this grade level across the school district.

Each student was given two launch tries. Some of the rocket designs were great while others just blew up on the launch pad. For those that failed the first attempt, they had to go back to the drawing board to reanalyze their designs, fix the flaws and head back out for the second launch. The success rate for the second launch was well above 80%… and the young rocket engineers were amazed to see their success.

Every student placed their rocket on the launch pad and expected success. When some experienced failure, it gave them a chance to go back, learn from their mistakes, and try again. Failure is the best learning tool a student can acquire. 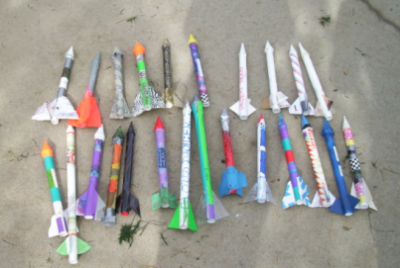 This is what sets spectacular teachers apart from ordinary teachers – taking a grade-level standard, adding a hands-on activity and making it home to the dinner table that night. This lesson made a book come alive, taught the science of rocket design and air pressure, success and failure skills and so much more.

If you have any question of the impact this one activity made on Ms. Heaton’s students, visit her teacher blog, LisaHeaton.com and read their comments.

Homer Hickam’s 1998 book, Rocket Boys: A Memoir,was based on his life as a young boy in Coalwood, West Virginia, as an aspiring rocket scientist. It was made into a movie, October Sky, in 1999.

Rocket Boys has been translated into eight languages and has received many awards. It was selected by the New York Times as one of its Great Books of 1998 and was an alternate Book-of-the-Month selection for both the Literary Guild and Doubleday book clubs. It was also nominated by the National Book Critics Circle as best Biography of 1998.

If you are a teacher and are interested in making your space unit come alive, here are some resources offered with permission from the Space Academy for Educators and the U.S. Space Camp.