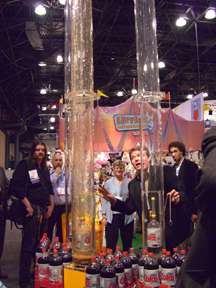 The opening day at Toy Fair was amazingly busy for those companies who had cool science product, according to a staff writer from CNET News.com. Caroline McCarthy writes, “Amid the madness of the 2007 American International Toy Fair here, a somewhat unexpected trend was visible: apparently, science rules.” Caroline stopped by the booth yesterday to ask a few questions about our new Geyser Tube toy and, more importantly about general trends in science education. She points out some very interesting observations in her article – teachers should read this.

Despite the perpetual debate over whether the United States is losing ground in raising the world’s best scientists, today’s pop-culture climate is remarkably conducive to making science trendy. The ubiquity of science kits and gadgets at the Toy Fair made me wonder–is science actually cool now?

Even YouTube has its influence. Be Amazing, a toy company that specializes in chemistry sets and licensed products from Steve Spangler Science, was drawing massive crowds with its demonstration of a “geyser” apparatus that allows kids to replicate the Diet Coke and Mentos experiments that have resulted in an explosive (literally) viral video sensation.

There’s no doubt that science products were the talk of Toy Fair this year. In just the first two days of the show, we gave away more than a thousand geyser test tube experiments for people to test out at home. That’s a lot of Diet Coke flying through the air.