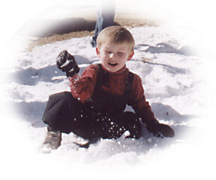 Who would have ever thought that a white powder that turns water into snow (okay, fake snow) would get so much attention? When we introduced Insta-Snow to the market in 2003, no one knew that this special polymer could have so many applications. For Jason Sawin, a firefighter in Littleton, Colorado and owner of CHS Snowmakers, Insta-SnowÂ® earned him a mention in the Denver Post. The picture to the right (mentioned but not shown in the article) is the home in Englewood, Colorado that the team at Steve Spangler Science snowed for NBC affiliate 9NEWS. Read the Insta-Snow article in the Denver Post. There’s no mention of his “secret” source, but you guessed it… Jason’s another satisfied customer.

You can purchase Insta-Snow in small, medium and large quantities.