Being pretty much buried in snow these past few weeks has made me think about Laura Ingalls Wilder’s “The Long Winter.” 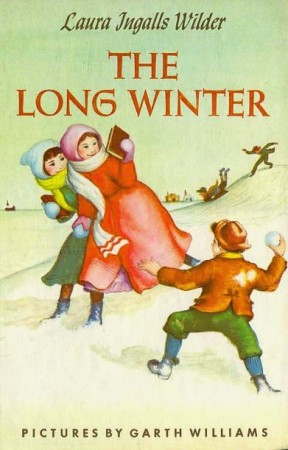 While we are not experiencing bone-wrenching cold and eave-deep snow from October to April as history shows that the Ingalls family did indeed experience, the winter has been severe enough, thank you.  Some days, it was impossible to get to the grocery store, but we did not have to grind seed wheat in a coffee mill to survive.  And while we did have a few hours when the power was out, we did not have to smear axle grease in a saucer and make a button lamp.

But if we ever need to, here’s how.

Ma told Carrie to bring her a button – one of Pa’s old overcoat buttons would do.  We will assume that this button was made of metal, because otherwise it just would not have worked.  I didn’t have a large metal button, so I used a quarter.

We’ll use a quarter instead of a metal overcoat button.

Then Ma took a small square of fabric and tied the button up in it.

She then smeared some of Pa’s axle grease in a saucer.  I used Vitamin E oil, but cooking oil, lard, Crisco, machine oil, or any kind of oil or grease will work.  Ma then placed the wrapped and tied button into the grease and rubbed a little all the way up the fabric.

Then she asked Pa for a match, lit it, and touched the flame to the top of the fabric.

It made just a little light, but what a difference it made in the dark!  The flame burned the grease but not the fabric; it was like a little star in the dark room.  The heat drew the oil up through the cotton fabric and the flame fed on it and not the fabric.

Pa commented that people got used to new-fangled things like kerosene too easily, and forgot how to make do when times got hard.  I would say that a winter so cold that the cattle’s breath froze their heads to the ground and smothered them was one of those hard times, but families back then still managed to get through it.

The snow here is almost gone today, but this time last week it was almost knee-deep.  And just because we probably will never have to actually use a piece of knowledge doesn’t mean we shouldn’t have to learn it.

“If only I had some grease I could fix some kind of a light,” Ma considered. “We didn’t lack for light when I was a girl before this newfangled kerosene was ever heard of.”

“That’s so,” said Pa. “These times are too progressive. Everything has changed too fast. Railroads and telegraph and kerosene and coal stoves–they’re good things to have, but the trouble is, folks get to depend on ’em.”

People who aren’t afraid to experiment and find different ways to do things are scientists.  We don’t all wear white coats and work in labs.

Some scientists put on heavy coats and go outside in double-digits-below-zero temperatures to make sure everything and everyone are all right and that nobody and nothing’s breath has frozen it or them to the ground.  Other scientists smear grease in a saucer or bowl and set wrapped-up buttons on fire so little children can see to go to bed in the cold and dark.

All those things our ancestors did to “make do” when they didn’t have or couldn’t afford the “normal” way to do something?  Science.

And when you think of some other way to do something when the “normal” way is out of your price range or reach?  That’s science, too.

Staff Spotlight on DJ — The Man of Many Words … and Hats

A Science Project That Could Change the World Jelly Marbles: The Versatility of Polymers
Scroll to top
Create a new list