Science Fairs get a lot of bad press these days, and I don’t like it. Honestly? I think the only bad science fair is a science fair that a child is FORCED to enter every year.

You heard me. The science fair should be 100% voluntary, most of the time.   Maybe it would be better if fifth grade, for example, was a mandatory year, and all others were voluntary.

I fully understand that this stance will not make me very popular with a few science teachers, but as I am a science teacher and a parent, I have a right to my own opinion, which is based on personal experience as are all opinions.

Don’t get me wrong – I am a HUGE fan of science fairs. My own children looked forward to it every year, from K-8, and even while a few other kids were kicking and screaming and whining and claiming it wasn’t FAIR, the fact is, it was absolutely fair. The fair was fair.

This picture went viral recently, all over the internet. 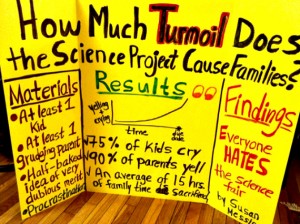 Please click the link and read Ms. Messina’s article at the Huffington Post about how and why she created this poster!

This poster was created by Susan Messina, who is not at all against science fairs – just the ones that force kids who aren’t interested to participate, too. Her article over at the Huffington Post is very interesting and informative, and will give you the background into why she decided to make the poster.

Ms. Messina suggests that if the science project is required, then it could be a family project which would allow students and parents to work together collaboratively. I disagree, unless the assignment is for a group project. I think any assigned project should be an individual thing.  Families may, and should, provide encouragement and help with supplies, and the occasional suggestion, but mostly, parents and siblings need to stand back and let the student create. However, if the assignment IS for a group project, then the science fair is the perfect chance for the entire family to learn together!  Otherwise, let the student create the project and show his/her family the creation, complete with hypothesis and experiment and results.  It’s good practice for the judges!

Parents who shamelessly do the science project themselves ruin it for all the families who do it RIGHT.

Years ago, my son was the only one in his kindergarten class to submit an entry to the science fair at his school.  He was obsessed with sea creatures at this time, and with pirates.  His project kind of reflects both interests.  Please don’t call CPS on me; he’s a grown man now. 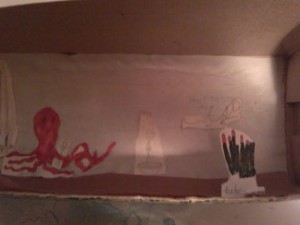 Andy’s diorama. He had just turned 5.

Now, a diorama is NOT a science project, but for a kindergarten student who had had no instruction and who insisted on entering the science fair even though his teacher and the fair judges weren’t sure if a five-year-old qualified, I think it’s pretty good.  When the judges looked closely, I saw their expressions change and they convened for a chat.  Can you figure out why? 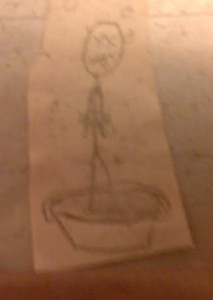 He’d read that pirates sometimes disposed of prisoners this way.

He told the judges that he wanted the bottom of the sea to look interesting. 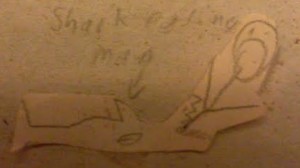 He wanted to illustrate what happened if a pirate went swimming in infested waters.

His favorite stuffed toy was a big red octopus we got for him at Epcot.  He wanted to include Big Red in his diorama in such a way that people would remember him. 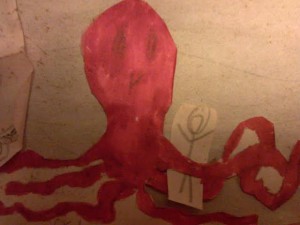 The octopus is my favorite part of Andy’s diorama.

And, he loved tubeworms.  He tried to draw a coral reef but he didn’t think pirates would dispose of a prisoner via the cement shoe route near a coral reef.  “Too many onlookers.”  He may have been only five years old, but even then he was looking ahead. 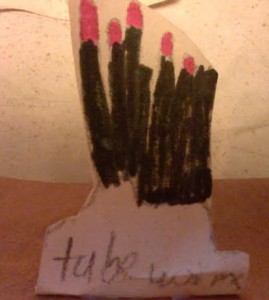 Remember now, that a diorama is NOT a science experiment.  Do not encourage your kids to try to enter a diorama or demonstration or poster as a science project.  My little son, when asked, was able to explain the science behind why cement shoes would certainly sink a naughty pirate to the bottom of the sea, and how a foolish pirate who went swimming in shark-infested waters would certainly become the first course for a shark’s supper,  He did admit that his soft huggie octopus would probably never try to strangle a pirate, but that he’d included that scenario for effect.

But for a very young child who is only just beginning to learn about the world outside his own home, whatever strikes and holds his/her interest is something well worth encouraging.  Just be there to ask questions and be sincerely interested when your child gives you a lengthy explanation.  Take him/her to the library and look at picture books.

Do experiments in your home.  My son tied gravel to his Batman action figure’s feet to see how many it would take to sink the Dark Knight to the bottom of a pail of water.  He got out his postcard of tubeworms from Marineland to make sure he was drawing and coloring them correctly.

As he grew older, his science fair entries were actual experiments, and in seven years, he earned six blue ribbons.  His final entry, in 8th grade, was about how air pollution is destroying the world’s statues and buildings.  He took eight huge pieces of sidewalk chalk and carved them into statues, mounted them here and there on a paper-mache mountain, and sprayed them with vinegar several times a day, to represent pollution.  Every night he took a picture.

Our buildings and statues are definitely being worn down by pollution.

He wanted to use hydrochloric acid instead of vinegar, but we said “no.”

We did have some locked in the garage cabinet, though.

Which helmet protects your head the best?

How Roxborough Elementary Encourages Participation in the Science Fair

Kindergarteners Banned from Science Fair? What is the Right Age to Participate?

Science Fair 911 – What If My Results Are Wrong?