What’s so scientific about your holiday gravy?  Isn’t gravy just, well, food?  Food we put on mashed potatoes and turkey at Thanksgiving and Christmas and Sunday and, well, pretty much any time?   How could gravy have anything to do with science? 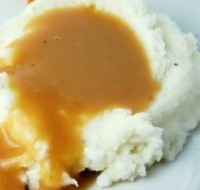 Here’s the thing, drooling holiday turkey & gravy lovers:  gravy-making is all about the science of starch.

Starch?  That white powdery stuff Great-Grandma used to make her handkerchiefs and your Great-Grandpa’s boxers smooth and stiff?

Yep.  Exactly.  Only in the kitchen, we use white powdery stuff made especially for use in food.  Otherwise, it’s the same stuff.

Starch is plant-based, and many people use wheat or corn-based starches to make gravy.  I like to use corn starch*, as flour (wheat-based starch, no joke!) adds its own flavor to gravy whereas corn starch does not.  Both, however, require some fancy whisking to get all the lumps out!  (If you’ve ever had to choke down lumpy gravy, you’ll appreciate the extra effort put into smooth gravy!) 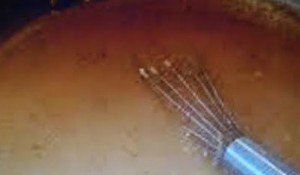 A kitchen whisk makes stirring lumps out of gravy a lot easier and quicker!

What is starch, exactly?  Interesting question!  Starch is a complex carbohydrate.  To put it more simply, starch is a fancy chain of sugars – fancy, because while sugar dissolves completely in liquid, starches absorb the liquid, rather than disappearing completely in it.

If you added a heaping tablespoon of sugar – white or brown – to your skillet of hot turkey fat, it would simply disappear, completely absorbed by the liquid.  But if you added a heaping tablespoon of cornstarch or flour to that same skillet, it would start bonding with the fat and the entire contents would start to “gel.”  Add a little salt and some milk to your skillet, keep stirring, and in a few minutes, you’ll have delicious gravy, table-ready to pour right onto your mashed potatoes and turkey slices.  Without the addition of milk, your gravy would be too stiff to ladle out!

If you use flour as your starch, your gravy will be a little “stickier” than gravy made with corn starch.  Many people prefer that, and many people do not.  Your call.  If you have a gluten allergy, use corn starch – flour contains gluten.

Take a quick scientific peek at what you’re adding to your gravy: 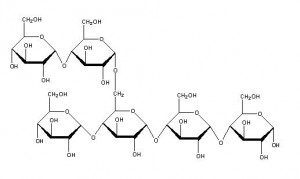 You see?  I TOLD you gravy was scientific!

Especially for you cooks, here’s a simple recipe for holiday (and any other day) gravy:

In a large skillet, heat (on low) 1 cup of turkey drippings (or ham drippings, or bacon drippings, or butter), stirring constantly.  Sprinkle one heaping tablespoon of corn starch onto the drippings, still stirring constantly.  When the mixture begins to bubble, SLOWLY add milk (or water if you don’t want your gravy as rich) and still stirring constantly.  Switch out your spoon for a whisk, and begin slowly whisking the mixture.  It will start to firm up very quickly.  When it’s the right degree of firm to your taste, remove from heat and pour into a gravy boat or bowl.  Take it to the table and start eating.  Gravy should be served and eaten immediately, so it’s probably going to be the last thing set on the table before everyone dives in.  If gravy has to sit and wait, the consistency changes.  That’s scientific, too.  Look it up.

Make a big batch; gravy freezes nicely, and there’s something about turkey gravy in the spring. . . .

Don’t think it’s just wheat and corn that contain starch.  Loads of vegetables, legumes, and grains are starchy.  Potatoes,  pumpkin, sweet potatoes,  all kinds of beans, peas, rice, and tons of other foods are starchy.   Don’t try to make gravy with all of them, though.