We take a lot of calls during science fair season and throughout the year from students and their parents for help on projects. One question we receive more than most is a concern when the results of the project didn’t support the hypothesis or have the intended outcome.

Let’s start with the hypothesis. What is a hypothesis?

After you do research on your topic and choose your independent variables, you make an educated guess as to what you think the outcome of the experiment will be. A hypothesis is usually an “I think” statement.

A sample hypothesis for this experiment could be – “I am testing the bacteria levels on the home phone, the TV remote, bathroom sink faucet and door handle. I think the door handle will have the most bacteria. ” 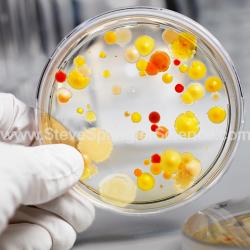 Conduct your experiment and test the bacteria levels swabbing each surface using a Bacteria Growing Kit. Wait about a week and check your cultures.

What if the door handle sample had a lot of bacteria, but the TV remote had twice the amount?

The experiment did not support your hypothesis.

And don’t be tempted to switch the lids to show your hypothesis to be true. Your results aren’t wrong and your hypothesis isn’t wrong. There isn’t a wrong or right in science experimentation.

Keep in mind that your hypothesis was an educated guess. Your project was to conduct a scientific experiment and find results. The results are what is most important. Being right or proving your hypothesis is not.

What if your friend also conducted the same experiment at their home and found their phone contained the most bacteria?  Or you followed an experiment you found online and did not get the same results?

Again, don’t panic. Your results are your results.

Science  is about finding an answer through experimentation. A hypothesis will help give you a direction, but this is a situation where having the “right” answer isn’t important.

What if every scientist was more concerned about being right vs. true scientific discovery? What if scientists switched the lids on their Petri dishes so they could match past results? Science would no longer be rooted in facts and would instead be based on feeling. We would not have the knowledge and understanding about our world that we do, thanks to scientific research and discovery.

So own your results, whether they prove your hypothesis correct or refute it. The most important thing about science is not getting it “right,” but making a discovery through experimentation. Just make sure in your conclusion section, you explain how your hypothesis was refuted and why you think that is the case.

How Roxborough Elementary Encourages Participation in the Science Fair

Steve's 13th Appearance on the Ellen Show – In Case You Missed I... Leprechaun Visits, Green Water and Lots of Mischief for St. Patrick’s...
Scroll to top
Create a new list