All those juice boxes, pouches and bottles hold a little science inside – give them a squeeze, force the air out and shoot the straw at your sister. The only problem is the larger hole around the straw allows the air to leak out and the straw doesn’t travel far.

So grab a few straws, some modeling clay and an empty Kool-Aid juice bottle to make a launcher that will shoot that straw across the room while demonstrating Newton’s Third Law of Motion. 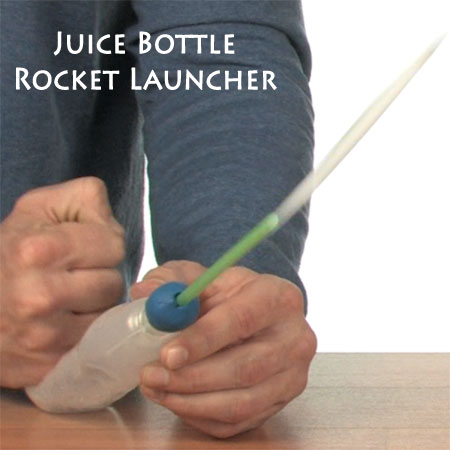 This experiment was designed using the Kool-Aid Bursts juice product. While other flexible juice bottles may work, the Kool-Aid product works very well. The larger of the two straws should fix loosely over the smaller straw. There should be no friction or resistance at all or the straw will not be able to launch. If you’re tired of searching for straws, just stop by Starbucks® to enjoy a drink and pick up a few straws.

Be careful! Never point the straw rocket at anyone. The goal here is to launch the rocket up in the air (not at someone). Be sure to cover the plugged end of the straw with something soft and round to protect someone from accidentally getting hurt by a sharp edge.

Melt It, Blow It Up, Smash It But Don't Eat It – New Book Shares Lots of Candy Experiments
The Science of Cupcakes
Popsicle Stick Chain Reaction Sick Science!
Indoor Fun: How to Make Science Kids’ Play at Home
Table Tricks to Keep Them Busy Before and After the Turkey is Gone
High School Students Get a Kitchen Science Lesson with Homemade Ice Cream
Eggceptional Eggs-periments – Incredible Egg Geodes
The Science Behind the Musical Fruit
1 reply