One of the biggest hits of the summer is the White Lightning Stick. On the Fourth of July, we held a small firework show in our front yard with our neighbors. 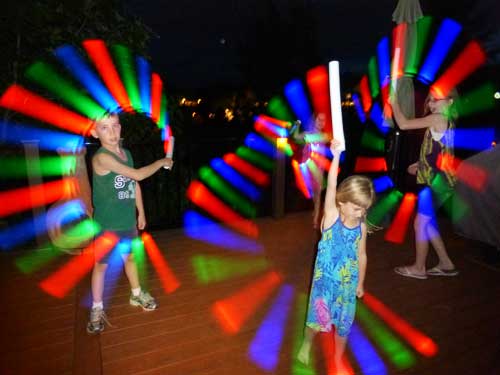 Along with the traditional sparklers and black snakes, we also shot off several film canister rockets and Mentos soda geysers. While the kids were waiting for the next activity, they played with the light sticks. Naturally, the sticks were first used as swords and weapons, but as the sun set, they began to really look at the light sticks and made observations.

When they waved the White Lightning Stick, the kids noticed the colors separated into red, blue and green. Soon they were experimenting with different movements of the stick and their bodies to see which produced the coolest effects. This lasted only so long and then they were off running through the yard and waving it in the air. 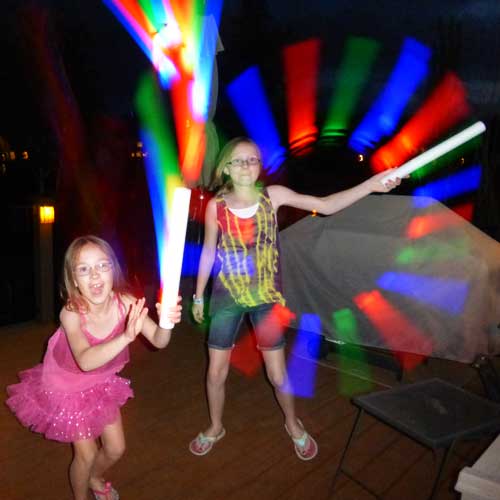 What makes these plain white tubes so special? Inside an LED (light emitting diode) light with red, green and blue bulbs sits on a small disk with a battery. A mirror at the top reflects the light in the tube. The styrofoam disperses the light.

The colors will cycle through six different options with the button on the bottom.

You may ask how only three colors produce all of the other colors. The primary colors of light are red, green and blue or RGB (like computer and TV screens). Mix them together and you get white. Mixing colors is an “additive” process, meaning the wavelengths of light add themselves together to transmit a new color.

Mixing pigments is a “subtractive” process because a pigment absorbs specific colors of light, subtracting them from the light striking it. When all colors are mixed together, they only reflect one color. 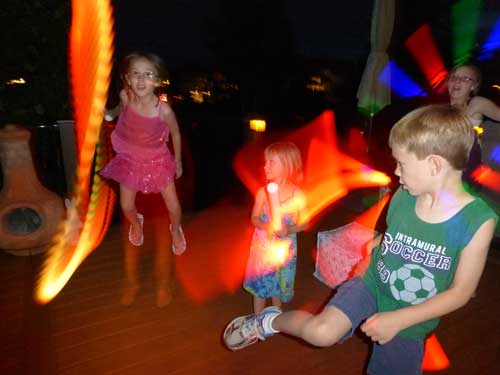 How does the light stick work?

The blurs of color that appeared as they moved the stick come from the way eyes detect the movement and the brain processes the motion of the stick (or perception of its motion). Some say that the image of the color remains on your retina for a fraction of a second before it disappears (so-called persistence of vision). Other people don’t agree and say persistence of vision is a theory or even a myth. Notice that the flashes of the same color, say green, appear in different places.

That’s caused by where the stick is in its movement when the green LED flashes. What we saw is a sizable green blur or smudge even though the flash itself was only a split second long and the stick had actually moved beyond the spot where we apparently saw the flash.

The White Lightning Sticks were not put away the day after the 4th of July. They come out when the sun goes down. We don’t have fireflies in Colorado, but the light sticks add color to the summer evenings.

It’s not just for summer – a White Lightning Stick is a great addition to a Glow-in-the-Dark Party and has a place on the trick or treat trek at Halloween, too. Or ring in the New Year with flashes of color. (It helps locate you in the dark but it is not an officially sanctioned safety device.)