Reveal invisible secret messages and drawings under a black light with a spooky homemade Halloween projector.

These handheld projectors are perfect for puppet shows, lighting up while trick or treating, flashing messages in the dark to your friends, haunted houses and more. Take them outside for fun after dark. Decorate a piece of paper, draw your message or picture with a fluorescent highlighter, glue it to a cup, add a black light and you are ready to take on the night.

With the Black Light Secret Message experiment, you’ll see that certain highlighters aren’t just brightly-colored – they’re actually fluorescent and glow underneath a black light! The secret messages and floating images you’ll create with this experiment are sure to create screams of joy and shrieks of excitement. Some even break open highlighters and squeeze out the ink to make glowing potions. On Friday, we will share the Science Behind some of our favorite glowing recipes. 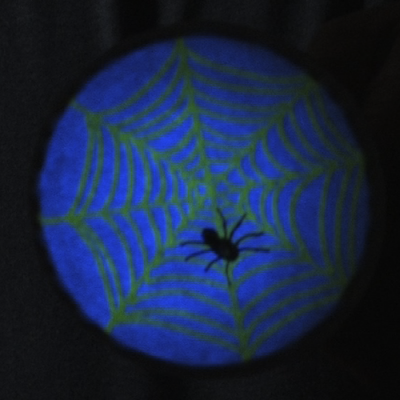 NOTE: You may have found that certain colors of highlighter do not fluoresce underneath the ultraviolet light. These highlighters do not contain fluorescent dyes, but you can get creative with them. Try using them in unison with the fluorescent highlighters to make incredible creations!

The Science Behind This Activity

When it comes to glow in the dark, it’s important to know the difference between the two common types of glow,fluorescence and phosphorescence. 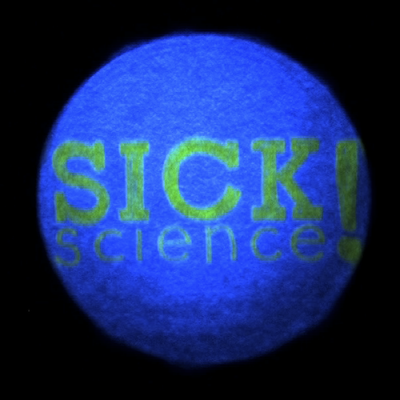 Fluorescence – This type of glow occurs when some form of radiation, such as light, causes an object to glow. For example, fluorescent papers and poster boards glow in the daylight. They may seem to glow even brighter under black light (ultraviolet), but in either case, as soon as the light is removed, the glow stops. Fluorescent things do not glow in the dark all by themselves – they require some other form of energy such as ultraviolet light to “excite” them.
Phosphorescence – Phosphorescence is just like fluorescence, except that the glow continues even after the light used to excite it is removed. “Glow in the dark” toys phosphoresce brightly in total darkness after being “charged” or excited by ordinary white or ultraviolet light.
Some highlighters use ink that contains dyes that are fluorescent. When you draw the designs on the circle, it probably looks like those designs will glow when you turn the lights off, but they don’t. The dyes in the highlighter ink require a black light to produce the special glow.
October 17, 2012/1 Comment/by stevespanglerscience
https://www.stevespanglerscience.com/wp-content/uploads/2017/07/steve-spangler-science-logo-435.png 0 0 stevespanglerscience https://www.stevespanglerscience.com/wp-content/uploads/2017/07/steve-spangler-science-logo-435.png stevespanglerscience2012-10-17 12:32:582012-10-17 12:32:58The Invisible Secret Message That Glows in the Dark