Halloween is the time for glowing concoctions, decorations and science activities. Everything is better when it glows! Before we get into the experiments…first a quick science lesson on glow. 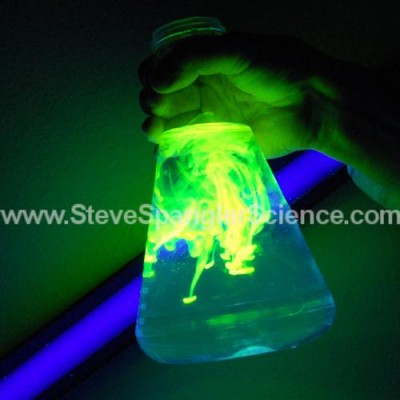 Chemiluminescence
Sometimes a chemical reaction can produce light without producing heat. When that happens, we call it chemiluminescence. Light sticks contain chemicals that when mixed produce nearly any color of light.
Bioluminescence
This is a particular kind of chemiluminescence. Fireflies, certain fungi, various fish, and some bacteria can produce light all by themselves. When such living things produce light, it’s called bioluminescence.
Electroluminescence
Perhaps the best example of electroluminescence is lightning. When high voltage electricity passes through a gas, the gas can become excited and glow. In the case of lightning, the electrical spark passes through the air causing it to glow brightly. Neon signs are also examples of electroluminescence. In this case, high voltages (e.g. 12,000 volts, alternating current) are passed through a glass tube containing neon gas. When the neon gas becomes excited, it produces a bright orange glow. Sometimes argon gas is used instead of neon. The argon produces a blue glow.

We have seen many people on Pinterest and across the Internet open Glow Sticks and pour the liquid out for glowing concoctions. Glow sticks contain glass tubes that shatter when cracked to mix the two chemicals inside. The liquid can contain glass shards when poured out. Glow stick chemicals are also toxic and can cause skin irritations. For more on the dangers of opening Glow Sticks, please read our post The Dangers of Opening Glow Sticks.
Some crafty people also open highlighters and squeeze the liquid out of the pen well. This isn’t dangerous but can be pretty messy. If you choose this route, make sure you are choosing highlighters that contain fluorescent ink.
Glowing Drinks
You can make your drinks and Mentos geyser glow by using tonic water. Tonic water contains quinine, a chemical that glows (fluoresces) under a black light. Quinine was added to tonic water to help fight off malaria. Tonic water still contains a small amount of quinine, which makes it a perfect material for glowing geysers. Set the stage, turn off the lights, drop the Mentos and you have a glowing geyser… an amazing finale to your Halloween party! 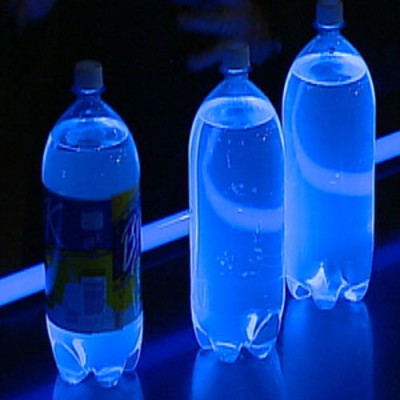 Glowing Ice Cubes
If you don’t want to drink tonic water, why not use it to create glowing ice cubes to add to your favorite drink. Just pour tonic water in your ice cube trays and freeze. When they are completely frozen, add them to your party drinks to create an eerie, glowing beverage! 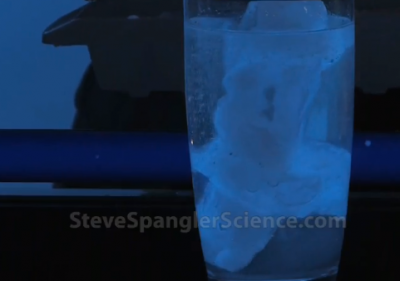 Glow Powder
Glow powder can be used for craft projects in place of glitter or crayons. Use your imagination. One of my favorite activities for glow powder is decorating paper designs. I cut out pumpkins, ghosts, etc. on black construction paper. Squeeze Elmer’s glue or use a glue stick on the paper in a design to make it sticky. Make faces, patterns, or whatever you want to create, then sprinkle the glow powder over the paper. Shake off the excess back into the container. Let dry. Hold the paper up to a black light or regular light to “charge” the glow powder. Then turn off the lights. My kids do this activity and then run to the windowless bathroom to check out their designs in the dark. I’ve also used Glow Powder to decorate trick-or-treat bags with kids during Halloween parties. The bag glows in the dark while they are out on Halloween night.

Glowing Pumpkins
This activity was featured on Martha Stewart a few years ago. Instead of carving your pumpkins, make them glow. Glow powder is needed for this activity. Glow powder charges in regular light or under black light and then glows in the dark. Use contact paper and cut out face pieces. Stick them to your pumpkin. Spray the pumpkin with stick adhesive (for younger children or a less toxic version, you can also “paint” the pumpkin with Elmer’s Glue.) Shake glow powder evenly over the pumpkin to cover it. Let dry. 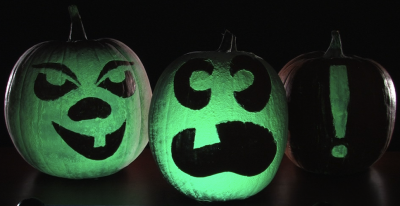 Atomic Glow
Under normal light, Atomic Glow turns water a cool greenish-yellow color, but under black light it glows an eerie green color that looks “atomic.” Unlike glow powder, Atomic Glow needs a black light to glow. Add it to any of your Halloween liquids and watch them glow. Just add it to water in a beaker, turn off the lights, turn on the black light, and watch the glow spiral and spread through the water. Very creepy and cool!

Drop a few pieces of dry ice into a cylinder filled 3/4 full with warm water. Add a few drops of Atomic Glow and then a few drops of dish soap to create the bubbling, glowing concoction below… 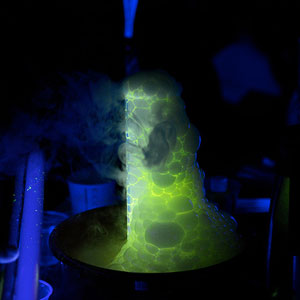 Glowing Gooey Eyeballs
Imagine reaching into a jar filled with slimy, gooey eyeballs for Halloween. The secret is a special water-absorbing polymer called Jelly Marbles. Just add water and the tiny beads absorb 300 times their weight in water and turn into… well… eyeballs. To make the eyeballs glow, add a little Atomic Glow into the water while hydrating and you have glowing eyeballs. Once you touch them, you won’t be able to put them down. A word of caution – Atomic Glow will stain clothing and skin.

Invisible Secret Messsage that Glows in the Dark
Use fluorescent ink highlighters to draw a message on a piece of paper. Glue the paper to the rim of a plastic cup, insert a small black light into the back. BAM! In the light, all you see is the paper. In the dark, flash the black light to reveal a secret message.

What are your favorite Halloween glowing activities or recipes?

The Top 20 Best Halloween Activities from Kid Bloggers
Until Next Year, Polymer Body Parts
The Invisible Secret Message That Glows in the Dark
Sick Science! Summer Camp – Make Your Own Firefly Glow Jars & Glowing Drinks
Set Up Your Own Scary, Spooky Haunted House
The Absolute Best Slime Recipes for Halloween
What Is Dry Ice?
Ultimate Halloween Party Ideas from the Spangler Effect
7 replies

The Invisible Secret Message That Glows in the Dark Can a Vampire See Itself in the Mirror?
Scroll to top
Create a new list