UPDATE: Team NO Limits! competed against 68 other teams from China, South Korea, Guatemala, Colombia, Alberta, Ontario, British Columbia, Mexico and the United States.  They came in 6th out of 69 teams and received 92 points out of a possible 100 points for their Instant Challenge. Their next goal? To walk across the stage at the Global Finals next year. Good luck and congratulations from all of us at Steve Spangler Science.

We want to extend our congratulations to Team “NO Limits!” from Westridge Elementary in Littleton, Colorado. They are headed to Destination Imagination’s Global Finals this week to represent their school and state. The team won honors in problem solving and creativity in local, state and regional tournaments to achieve the national invitation.

The competition will be held May 23 – 26  in Knoxville, Tennessee.

The team is made up of three girls and four boys – two 6th graders, one 5th grader, one 4th grader and three 3rd graders. Team members include Kate & Lexi Lubotsky, Davis & Tate Morrison, Jack Isenhart, Tyler Shepard, & Elizabeth Dougherty. The two 6th graders on the team required that they compete against 6th through 8th graders, despite having younger children on the team. 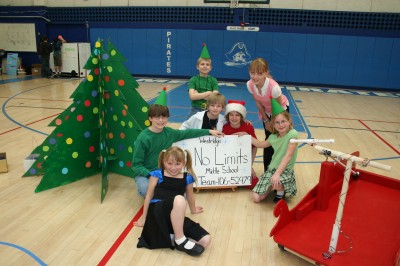 Destination Imagination is a non-profit extra-curricular organization that encourages students to learn through creativity, teamwork and problem solving. More than 125,000 kids in the U.S. and thousands in 30 countries across the globe participate in the program each year. Students work to solve challenges and present their solutions at tournaments. DI competitions bring out the best in kids, as they use their imagination and creativity to solve a problem. For more on the Destination Imagination tournaments or how to start a chapter in your school, visit the DI website.

Team managers, Brian & Kim Isenhart say, “Destination Imagination is a program where students learn to work together to solve a multi-level year long challenge. In the process, our team of 3 girls & 4 boys have learned about mechanical engineering, electrical circuits and so much more. They have discovered how fun science is!”

Team “NO Limits!” participated in the Assembly Required Challenge, one of seven challenges that take several months to complete and use mechanical or structuring engineering, science, fine arts, improvisation or community service.

The Assembly Required Challenge asked teams to build a piece of moving equipment that had to support the weight of a team member and pick up and deliver 240 parts.

The motorized cart the Littleton, CO team developed and built, used a hand powered drill attached to a bike chain & sprocket, to turn the carts’ wheels and was powered by 16 AA batteries inserted into a homemade battery holder. Other team members assembled the 240 parts into 40 products. The products were then delivered to a separate area. A team written skit accompanied the process. Everything had to take place within 8 minutes.

The Littleton team won 1st place at the Jeffco Regional DI Tournament at Alameda High School  & DI’s most prestigious honor, the DaVinci Award, for having a unique approach to a solution, for risk taking and/or for outstanding creativity. At the Colorado State DI Tournament, held at Auraria Campus in Denver, the team won 3rd place & the Renaissance Award, for outstanding skill in the areas of design, engineering, execution or performance.

Team “NO Limits!” is actively fundraising to have the opportunity to send their team to Tennessee in May. If you would like to support their efforts, checks made out to Colorado Extreme Creativity with Westridge Elementary written in the memo section of the check, may be sent to Dwight Rudolph, the Colorado Extreme Creativity Treasurer, at 7567 S. Depew St., Littleton, CO 80128. Supply your name and address, and Mr. Rudolph will send you a letter for the tax write-off for your contribution.

All of us at Steve Spangler Science send good luck and well wishes to the team and hope they have fun in Tennessee. We will post an update when we find out how they did.