I remember coming to the NAEYC Conference years ago and watching Steve Spangler present his hands-on science activities to a room of 50 or so early childhood educators, but those days are long gone. That intimate workshop experience in the past has given way to a ballroom packed with a few thousand teachers who are wondering what he’s going to do this time.

“I saw Steve last week on the Ellen Show and didn’t even know he was going to be at this conference,” said Shawna Dematre, a second year teacher from an early learning center outside of Nashville. “When I saw his name on the program, I wanted to come to the session to see how I can do more science experiments for my kids.”

When Steve hit the stage, the audience had already been treated to twenty minutes of simple science experiments and other video clips from Spangler’s website. Within five minutes from the start of the program, pieces of potatoes were already flying through the audience and he was setting up his main themes:

If you’ve ever heard Steve speak at a conference, you know that he’s not a PowerPoint presenter. Instead, he uses lots of demos and props and stories to illustrate each of the points. I found myself getting so caught up in watching the science experiments that I had to quickly scribble notes as he transitioned to his next point. But my favorite idea was so simple, and it makes sense: If it gets to the dinner table, you win. He’s speaking to his earlier observation that there’s a difference between doing an activity and creating an experience. When teachers create experiences, kids will remember them and even share them (on their own!) at the dinner table. The whole thing comes full circle when the parents stop by and ask questions about something that happened in class like… Did you really float a bowling ball? or Why does my daughter want 10 boxes of cornstarch?

“I’m so honored that this many teachers would attend this session,” said Steve after an impromptu book signing session at the edge of the stage. “I’m never quite sure what to share because so many of these teachers have seen me speak in the past. I want to give them something new to try with their kids while at the same time addressing some of the bigger ideas of creating experiences that the children will never forget.”

Spangler shared stories about a kindergarten experience he had trying to push straws through potatoes. While it seems impossible, it’s actually quite easy if you know the secret: Put your thumb over the end of the straw to trap the air and to give the straw rigidity and strength. This simple experiment morphed into a larger scale potato “pusher” that launched a chunk of spud a few hundred feet to the back of the room. Again, it’s a story about creating experiences, which is something that Spangler does well, even with his audiences. Within just a few minutes of demonstrating his giant air bag activity, everyone in the audience (yes, everyone!) was doing the activity themselves. The room literally erupted into a giant science experiment. 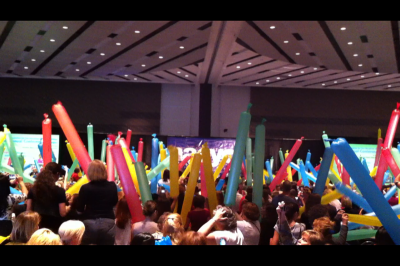 As Spangler points out, “If you’re going to be a creator of experiences, you need to feel the excitement of being the recipient of an experience as well.”

During the remainder of the session, we were treated to the sounds of science as Steve showed us how to use an ordinary turkey baster or a saw from the hardware store to teach children about vibrations and sounds. While it wasn’t part of his original line-up of demos for the session, Steve shared the same science experiment he did on the Ellen DeGeneres Show just last week when he used a heavy gas to make her voice sound very low. The special gas called sulfur hexafluoride was donated by the props people at the Ellen Show to share at NAEYC.

One of the great take-away ideas for me was Steve’s suggestion of partnering with a chemistry club at the local high school or college. He reminded us that these people are eager to find an audience for their students to share cool science demonstrations that might otherwise be too expensive or complicated for an early childhood teacher to do themselves. Ultimately, it’s the children who benefit from experiencing the excitement of being a part of the demonstration. Exposing our young children to many different types of science is a method that I think really works. As an example of what a local chemistry club or traveling science group might do, Steve shared this quick experiment called “Monster Foam.”

The event wrapped up with signature Steve Spangler experiment – his trash can smoke ring generator. Everyone learned how to take advantage of post-Halloween sales to find a simple smoke machine, cut the hole in the trash can, stretch the shower curtain (from the Holiday Inn – ha!), and blow out amazing smoke rings. His skill at knocking Styrofoam cups off the heads of audience members to the booming sounds of the William Tell Overture was the perfect, high-energy ending to an experience I’ll never forget.

Texas Teachers Attend Hands-on Science Boot Camp to Strengthen Their Teaching... What Happened to the Oil? Scientists Say it's in the Food Web
Scroll to top
Create a new list