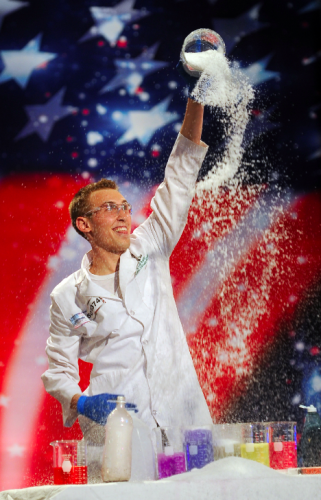 Jeff Vinokur is a science enthusiast who recently took his love for science and dance on NBC’s America’s Got Talent this summer.

On the show, Jeff performed science demos including erupting Insta-Snow, Insta-Worms and Exploding Hydrogen Balloons all while performing a dance routine. He shared a picture of the performance from the show from the Chicago Sun Times with us.

Jeff currently attends the University of Wisconsin-Madison as a Biochemistry major. Besides being a passionate scientist, he is also an accomplished hip hop dancer.

He performed his Dancing Mad Scientist act for America’s Got Talent in the Chicago Theater and advanced to the Las Vegas round. Unfortunately, Jeff was eliminated as part of the top 100 acts. Only a small piece of his act made the show and is included in the clip below.