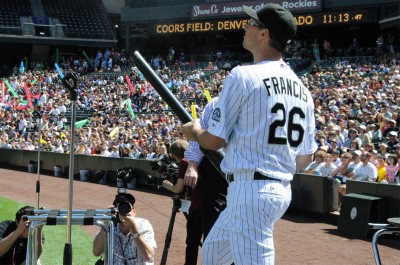 One of the highlights of Weather and Science Day was the look on Jeff Francis’ face – Colorado Rockies Pitcher – when I pulled out my potato “launcher” and told him to shoot it into left field.  It was like a kid in a candy store… The first shot was pretty good, it went past the outfielder, who apparently drew the short straw and had to stand in center field and catch potatoes.  The next shot went right into the glove… then, it was time to bring out the big daddy of potato launchers.  Francis’ face changed a little when I brought my giant potato launcher.  But, Francis was a good sport… he aimed and fired and that potato flew way over the wall in center field, right into the Rockies waterfall.  The crowd went wild… 5,000 science students watching the Rockies’ ace pitcher shoot a home run over 400 ft at Coors Field with a potato.