Earlier this week I had the extreme pleasure of shadowing some students from Rooney Ranch Elementary who came to our office before appearing on the Denver NBC affiliate 4:00 news program. The students’ were chosen to appear for their creative science fair projects and speaking abilities. 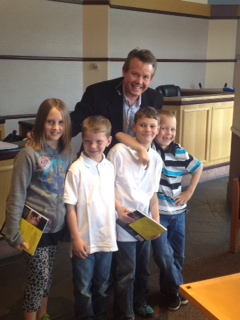 The students arrived with their parents at our offices around 3:00p.m. A little less than two hours before air time. Steve chatted with them and got them naturally talking and explaining their experiments. The kids were so excited and wound up, but Steve knew exactly how to get them to focus and share. 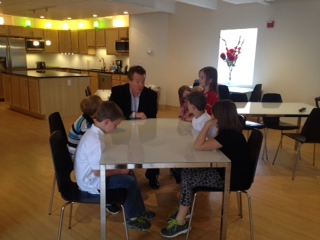 Next, they went into our studio at the Spangler Labs and did a little trial run to practice for the real television studio. The kids got a small-scale run through complete with bright lights and a desk. They had an opportunity to really begin to sharpen their chops. 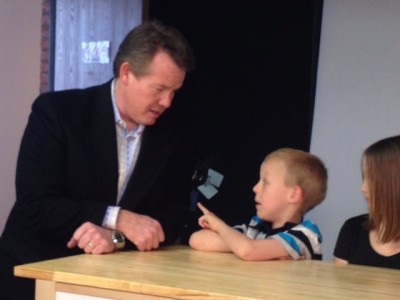 After the kids were all prepped and TV-ready, Steve took a little time to share some of his latest experiments in his playroom. The playroom is the one area in our offices that Steve is allowed to make a mess and not clean it up. This is where he stores all of his toys and science materials and uses the space to practice his demonstrations. The group participated in one of the more memorable (and my least favorite) experiments, the Sissy Machine. The Sissy machine is a vintage telephone with a crank. When the phone is cranked, it generates a low voltage current. Everyone held hands and felt the current move through their bodies. The Sissy Machine is used to demonstrate how electricity travels through the body. Humans are conductors of electricity. 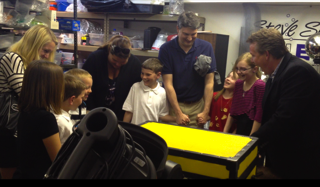 Steve ended the fun by lighting an alcohol rocket and setting fire to the table. A visit to Steve Spangler Science is never without some type of explosion or fire. Science definitely isn’t boring.

We loaded into cars and caravanned down to the news station. We all checked in at the front desk and headed to the studio. The kids got a quick lesson in behind the scenes news production before setting up at the guest desk and preparing for the appearance. 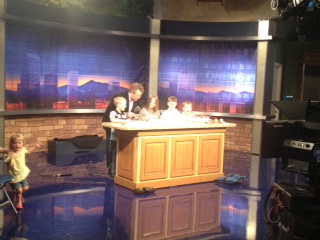 (My favorite part of the photo above is the little sister of one of the kids,
who almost snuck onto live television.)

Finally, their moment in the spotlight arrived. The kids all did a great job. It was fun to watch their parents’ responses to their presentations almost as much fun as it was to watch the kids do their thing. They all proved themselves worthy of the television lights. Watch their appearance on the video below. It’s not easy to go on live television in front of a million viewers and share your work. Congratulations to the kids – Zane, Julia, Dakota and Hunter and a special thank you to Steve Spangler for spotlighting some amazing science fair superstars.

Bullying Is Not a Game
Bubble Bubble on the Wall, Who's the Squarest of Them All?
Steve Returns to the Ellen DeGeneres Show for 14th Appearance
Magicians do the impossible first
A Visit from the Toy Guy – Chris Byrne
Steve Ignites a Passion for Science at Utah Early Childhood Conference
NAEYC 2006 – Fizz, Pop, Wow!
Cup Cakes For Science
0 replies

Teaching Then and Now – How Have Things Changed? Texas High School Student Gives His History Teacher a Lesson
Scroll to top
Create a new list