Ladies and gentlemen… please welcome our magicians for this evening… the amazing Bruce and Kitty Spangler.
As a very young child, I can remember sitting backstage and hearing these words as the orchestra began to play and my parents took center stage. I’ve often talked about my love for the art of magic, but few people know that I grew up in a family of professional magicians. When you live in a family of magicians, seeing your Mom float or get sawed in half is really nothing out of the ordinary. I remember taking my Dad to show-and-tell when I was in kindergarten. What did he do? My Dad pulled a torch out of his bag of tricks and ate fire for my entire class. Let’s just say that when your Dad eats fire for show-and-tell, it’s kind of a show stopper.

I recently introduced 9News reporter Kim Christiansen and photo journalist Eric Kehe to my parents, Bruce and Kitty Spangler, for a behind the scenes look at a special art that is being passed down through three generations. 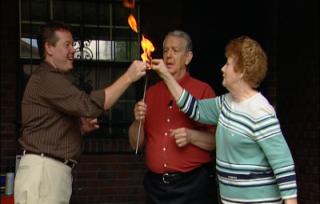 KUSA – So often we hear the story of a young man or woman taking over the family-owned business. Childhood experience is preparation for that move.

When their three children were young Bruce worked for US WEST in the knowledge/engineering division. Kitty did home day care and taught piano lessons.

Their “magic” occupations impressed all children, including their own. When their oldest son was in elementary school a teacher called home to talk about his “overactive” imagination. It seems the class was talking about their parents’ occupations and Steve told everyone, “My dad eats fire, makes people float and cuts my mom into three pieces.” 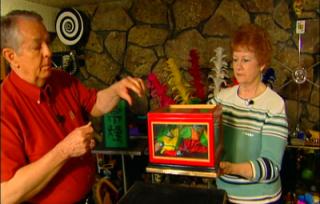 The magic is just one part to their show and their lifestyle. The other part is pure science. When he looks at his magic collection Bruce says, “Every magic trick you see down here has a scientific explanation, we don’t really believe in spells and ghosts and all of that.”

In order to be a good magician, Bruce and Kitty believe you need to be a good scientist first. That’s a lesson their children learned early on. Steve adds, “Being in a family of magicians you always started with the impossible and worked backwards. There was never a, ‘No you can’t do that.’ It was always, ‘OK, let’s just figure out how we’re going to do that.'”

It should come as no surprise that Steve grew up to become a very popular scientist. He’s Steve Spangler the Science Guy. He’s “performed” his science in classrooms around the country, on 9News and the Ellen Degeneres Show.

Steve has passed on his love of science on to his three sons. They are eager to perform their magical science at every opportunity.