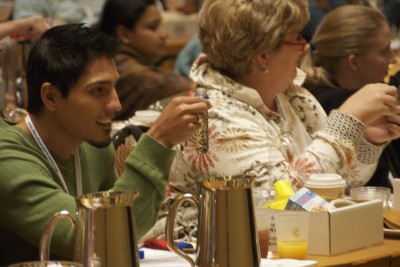 The audience of teachers (PreK-Middle School) was especially lively during our Hands-on Science Boot Camp in Tampa. The turn-out was great with over 180 teachers packed into the ballroom at the Westin Hotel and each teacher had his or her own reasons for attending. One third grade teacher told me that her school had cut her science time down to less than an hour per week. She was told to “integrate science into her curriculum” if she wanted more time for the “secondary” subject. Other educators (and a handful of home schooler and science museum program coordinators) attended in hopes of taking away some new hands-on science activities in an effort to spice up their existing curriculum.

It was also great to see Rhonda Newton and her cadre of teachers at the Tampa Boot Camp. Rhonda connected all of the science activities from the workshop to the Florida State Science Standards and shared it with the group. Huge thanks from everyone!

Download the Spangler Science Connection to the Florida Science Standards

As we wrap up the workshop at the end of the day, I often wish that I could pull the same group of teachers back together three to six months later to see if the learning objectives and teaching strategies really had an impact. We’ve all attended workshops or presentations where we laughed a lot and had a great time, but what was the take action message behind all of the fun… and did it change the way I teach? In other words, can a science education speaker do more than provide a motivational message during a day-long workshop?

Desh Bagley answered my questions when she was interviewed by CnewsPubs.com a few weeks after attending the Tampa Hands-on Science Boot Camp. Bagley is an informal science educator is owns and operates TechPlayZone, a science and technology center for young people. Desh understands the need for finding creative ways to get kids excited about learning science. Here’s what she had to say…

TAMPA — Over 180 educators attended Steve Spangler’s Hands-On Science Boot Camp at the Westin Hotel on Harbour Island in Tampa on Friday, Oct. 10. In addition to local school participants, many teachers traveled from Tennessee and Georgia to attend the amazing hands-on conference. One main objective of the Science Boot Camp was to show participants “how to turn ordinary science activities into unforgettable learning experiences” in an effort to improve students’ performance and increase students’ interest in science.

According to the www.SteveSpanglerScience.com Web site, the Boot Camp instructor, Steve Spangler, is “nationally known as a teacher’s teacher who shares his passion for learning with others in the classroom, on stage, and through multi-media resources.” His cool science demonstrations, motivational speaking skills, and contagious humor kept the Tampa audience on the edge of their seats as he shared creative insights for integrating science into curriculum.

The fast-paced 6-hour conference began with statistics from an international math and science study released in 2004, which stated, “American 4th graders are doing no better in science than they did in 1995.” Spangler explained that ten years of no progress in math and science could have significant impacts on America’s ability to develop future innovations in technology, defense, and national security. Spangler believes that teachers are the key to changing these statistics.

Participant Desh Bagley, CEO of TechPlayzone, a science and technology center for young people, grasped an important concept during the Boot Camp.

“I came away convinced that not only is it important to show that science is cool and fun, but it is equally important that each experiment cause students to discover, explore, and ask questions about scientific concepts,” Bagley said.

TechPlayzone is a Brandon Chamber of Commerce 2008 Small Business of the Year Finalist. Conveniently located near Riverview, Bloomingdale, and FishHawk communities, TechPlayzone engages young people in science, technology, engineering, and math through LEGO robotics, video game creation, movie making, and Steve Spangler amazing hands-on science experiments. Bagley continued, “I am more excited than ever about implementing Steve’s ideas into TechPlayzone’s winter technology camp and our after school program.” Other attendees were heard discussing how they would begin to integrate Spangler’s science concepts into their current curriculum.

After demonstrating more than 30 incredible science experiments, Spangler concluded the Boot Camp by encouraging educators to create incredible moments for children to learn. Spangler challenged, “success is if the classroom activity makes it to the dinner table for discussion.” For more information about Steve Spangler visit his website at https://www.stevespanglerscience.com. For more information about TechPlayzone’s after school program, camps, or birthday parties, call (813) 684-7329 or visit www.techplayzone.com/techplay.