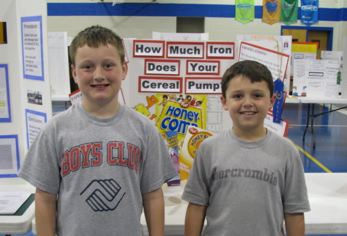 Brandt Callahan and Jackson Bartlett, who go to Parkview Intermediate School in Bedford, Indiana, took the Experiment of the Week and won FIRST PRIZE in the third grade division of the Science Fair! 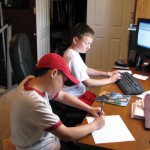 In fact, Brandt and Jackson added a little OOMPH to the experiment by using several different kinds of cereal instead of just one, and using a blender instead of a baggie and their hands. The boys admit that most of the cereals they used just didn’t seem to have any iron in them, in spite of what their labels claimed.

Next time, they’re going to use Life cereal, because they want to SEE the little black dots of iron! They’ve also decided that there definitely won’t be any raisins involved – the ICK factor was just too high with raisins.

Brandt and Jackson are in the third grade, and they learned about this experiment from their teacher. Jackson had won First Prize in first grade, and Brandt had never entered a science fair before, so they decided they’d be perfect partners!

Both Brandt and Jackson love science, but since Brandt’s mom is a math teacher, he added that math is his favorite subject. GOOD ANSWER, Brandt!

While the boys confessed that science is a lot more fun when they can get up and put their hands in it, they also said that experiments seem to go more smoothly when they’ve done a little reading about it beforehand.

Congratulations to Brandt and Jackson! Science Fairs can be loads of fun, and it takes a lot of dedication and hard work to win First Prize.

Young Rocket Scientists Inspired by Homer Hickam
First Geyser Tube Now Available – Powered by Mentos
How Roxborough Elementary Encourages Participation in the Science Fair
Science Fair 911 – Don’t Sweat the Science Fair We Are Here to Help
Putting Together an Amazing Science Fair Project
Science Fair Judging – Why Didn’t I Win?
Will I Get a Sunburn on a Cloudy Day? Testing the Power of the Sun with Energy Beads
Water Flowing Uphill?
0 replies