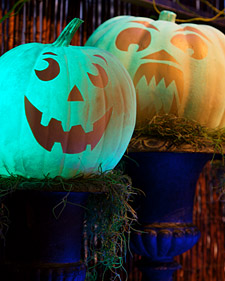 Hats off to Martha Stewart for job well done on her glow-in-the-dark pumpkins (okay, she called them funkins featured on October 26, 2007, on her television show. Our Media Product Coordinator, Brian Firooz, worked with the segment producer for several weeks to create a very cool effect using our Glow Powder and a little Martha Stewart creativity. The end result was a very cool glow-in-the-dark effect that was enhanced even more by using a black light.

The Science Behind Halloween Glowing Recipes

Denver-Area Moms Get Shocked at the Spangler Labs

Congratulations to Our Slime Contest Winner