Bloomington, Indiana’s Kid City had a Spangler Science experience this week at Ivy Tech Community College, and according to a very professional exit poll it was a big hit!

After building models with marshmallows and toothpicks, (the winner took home an Insta-Snow prize) a trip to the restroom to wash all that marshmallow dust off our hands was in order.  Before the students left the room, however, each got a squirt of GlitterBug lotion to rub all over his/her hands.  They were then told to wash their hands thoroughly.

The GlitterBug lotion demonstrated that casual hand washing does not get all of the dirt off. One black light viewing later, and the students decided to go back to the sinks and try again.

Polymer science is awesome in so many ways, and Insta-Worms is one of those ways. 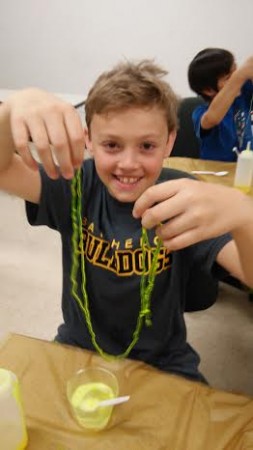 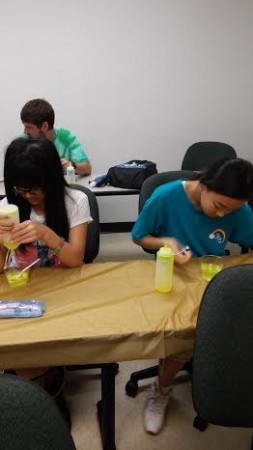 Both boys and girls agreed: Insta-Worms were awesome!

If it breaks, you can just    stick it back together!    Polymers!

You can make those Insta-Worms really long, too!

The Kid City counselors loved the Insta-Worms,    too!

Oh, and in case you were wondering, you’re NEVER too old to have fun with science – just ask those Kid City counselors up there!

And the QUESTIONS!  All morning, super questions about polymers, and pyramids, and black lights, and more.  When there are lots of questions, there is lots of learning going on.

QUESTIONS! There were    questions!

And there was tie dye – not the t-shirt kind – the milk kind! 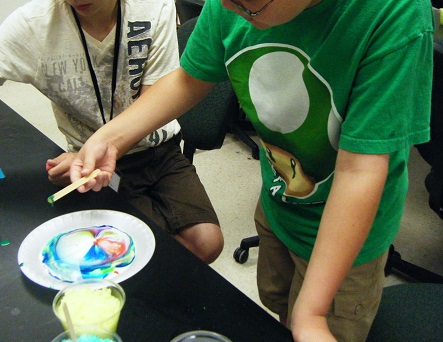 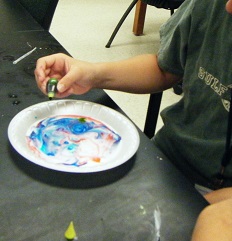 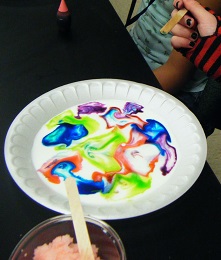 Color-Changing Milk is such a simple experiment, and yet the results are beautiful.  All you need is a plate, a cotton swab, a dot of Dawn dishwashing detergent, and some whole milk.  I think it usually looks like tie dye, but some of the Kid City students thought theirs looked like stained glass.  It did, too.

We did a lot more in our three hours together – culminating with some ice cream in a zip-lock bag – but these were some highlights.

The morning with Kid City was a lot of fun, for the counselors, for me, and from the reactions, questions, and laughter, for the students as well.  And, as with most things that create genuine laughter and fun, there was a lot of learning, as well.  I hope much of the morning’s lab ended up at each student’s dinner table, because, as Steve Spangler himself often says, “If it ends up at the dinner table, it was a success.”

As for that exit poll I was referring to up there, I asked each student, as he/she exited the lab, what they liked best.  The Atomic Worms pretty much won, but every experiment we’d done that morning was mentioned, so I count them all a success.

A success.  You know – like each and every one of those wonderful Kid City kids are now and will be for the rest of their lives.

The “how to” on Science Centers