Steve Spangler has admitted that most plants have a drinking problem, so I thought I’d see for myself if that was true. I experimented with capillary action and color changing flowers.

I started out with four clear vases.  I didn’t have any two that were alike, but that just makes my experiment more interesting. 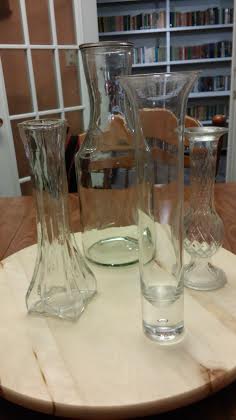 Since I would be dealing with fresh flowers, my next step was logical: I filled each vase with some hydrated Water Jelly Marbles.  I also got out the food coloring. 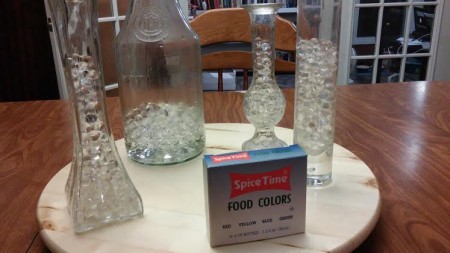 Next I filled each vase with water, and then put a few drops of food coloring in each vase.  This resulted in some interested formations. 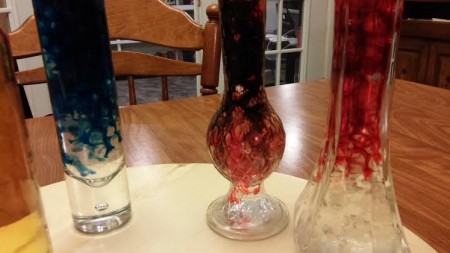 Then, I got my sharpest kitchen knife and cut a diagonal piece off the end of each flower stem.  Steve likes to give each flower a split end and let it share two vases, but I thought I would try it another way and see what happened.    Each of my flowers got its own vase. 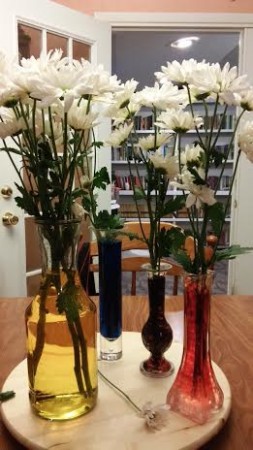 The big vase got two flowers, but the three smaller vases each got one flower.  Would the size of the vase influence which flower “changed” first?  We’ll see.

Each of my four vases got a different color: yellow, blue, red, and purple.  I wondered which color would show up first. . . .

I put all of this together on Sunday afternoon.  Today is Tuesday.  Look at which color showed up first! 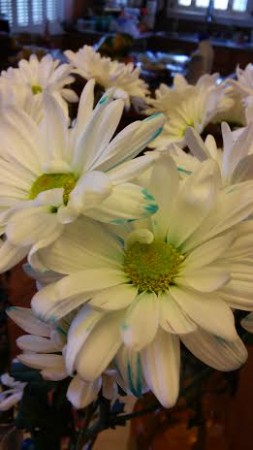 What exactly happened here?  It’s interesting!  (All science is interesting.)  We can compare the way flowers suck water up their stem to the tips of their petals with YOU, sucking soda up your straw into your mouth.  To quote Steve Spangler:

“Okay, now it’s time to get technical. There are two things that combine to move water through plants — transpiration and cohesion. Water evaporating from the leaves, buds, and petals (transpiration) pulls water up the stem of the plant. This works in the same way as sucking on a straw. Water that evaporates from the leaves “pulls” other water behind it up to fill the space left by the evaporating water, but instead of your mouth providing the suction (as with a straw) the movement is due to evaporating water. This can happen because water sticks to itself (called water cohesion) and because the tubes in the plant stem are very small (in a part of the plant called the xylem). This process is called capillary action.”

So much of science is also beauty.  Fresh flowers in the home add beauty and fragrance, and using them to do a little science adds to the enjoyment, especially when there are children in the home.

This is a science experiment that the whole family can enjoy.  It’s simple and pretty and inexpensive, and the science fair judges would be very impressed.

Now I can hardly wait to check on my flowers tomorrow, and the next day, and the next.  If one day can show results, what will three days show?  I’ll update this post for you so you can all see what I’ll be seeing in my dining room.

Science Fair – What Will the Judge Ask Me?
How Roxborough Elementary Encourages Participation in the Science Fair
Putting Together an Amazing Science Fair Project
Big Bag of Science – 12 Days of Wonder
How is a Science Fair Judged and Tips for Science Fair Success
Science Fair Winners Should Be Just as Celebrated as the Super Bowl Winner – President Obama
Which helmet protects your head the best?
Science Fair Boot Camp – An Intense Training Program That's Changing the Science Fair Experience
2 replies