I think there might be more science in Laura Ingalls Wilder’s “Farmer Boy” than in all the other Little House books combined, and that, my friends, is a huge, heavy, awesome load of science! 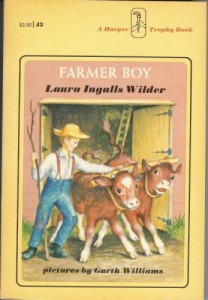 “Farmer Boy” took place about ten years before Laura Ingalls Wilder was born. Almanzo was a farmer boy through and through.

“Farmer Boy” is the story of Laura’s husband Almanzo’s boyhood, on a huge farm in New York State, and since his family grew or made almost everything they ate, wore, or used in any way, the science is everywhere!

Almanzo’s milk-fed pumpkin was always one of my favorite science experiments; we grew pumpkins, and my mother always had at least one milk-fed pumpkin because, as a little girl, SHE had loved the Little House books, too!  Some people don’t believe this works, but I can tell you that it does, because we  have done it for many years.

Growing an extra-large, extra-heavy, 4H Fair blue ribbon pumpkin is a lot easier than it sounds.  You won’t need any fancy equipment; you’ll just need a little time and a few things you’ve already got around the house.  Oh, and you’ll have to make friends with a little science called “osmosis.”

Take a sharp knife – get an adult to help you with this step! – and cut a very small slit on the underside of the vine, between the root and the blossom.  The slit should be quite shallow – just enough to barely touch the “juices” inside the vine. There should be no chance of the vine splitting apart; the cut in the vine must be shallow!  Underneath the slit, dig a little hole in the dirt and place a Mason jar filled with milk in the hollow.  Almanzo used a little bowl, but a Mason jar has less chance of spilling! 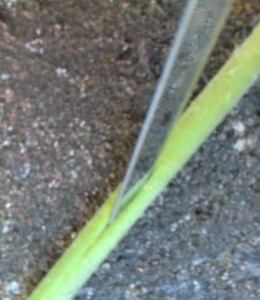 Be careful with the sharp knife, & don’t make the cut very deep!

Actually, you can put a variety of liquids in the jar, to feed your pumpkin.  Tea, fertilizer-enriched water, any kind of milk or cream, or any combination of “nutritious” liquids.  Mom used to pour all the leftover milk, tea, and coffee from the dinner table and take it out to pour into the Mason jar.

Now you need a wick, to draw the milk into the vine.  Almanzo used a candle wick, and so can you if you have a candle wick handy.  Mom always used a strip of cotton cloth.  I’ve used lantern wicking, and I think that works best.  Get the narrow kind. 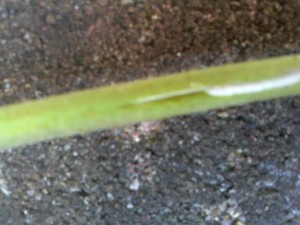 Make sure the end of the wick is inside the shallow cut.

Saturate the wicking in your liquid, and put one end of the wicking in the Mason jar, into the milk, and CAREFULLY insert the other end into the slit you cut in the pumpkin vine.  Almanzo didn’t “bandage” his pumpkin vine, but Mom always did, and I think it’s a good idea.  She just wound a few inches of gauze around the vine’s slit, ensuring that the wick would stay and keeping out insects.  She used to tell us that a plant was a living thing, and if it was cut, it should be bandaged and protected against infection. 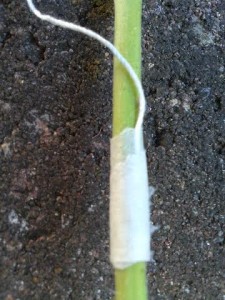 Whatever you do, don’t spread the slit in your pumpkin vine apart to get the wick into it – slowly work the wick into the cut.  It might take more than just a few minutes.  If you spread the slit apart, you’ll destroy the stem cells.  You’re performing surgery on a living thing, as Mom would say.  Be careful!

Now you’ve got a successful graft and you’ve set up your wicking,  so let the osmosis begin!  Those who don’t believe in the milk-fed pumpkin have probably never taken the time and trouble to try it.  We’ve done this for many years, and it really does work for us.

Be sure to check the contents of your Mason jar at least daily, and more often than that if the weather is hot and dry.  Your jar must never go dry.  Your pumpkin blossom will drink up the milk without ceasing, and the extra nutrition will allow your pumpkin to grow larger and heavier than the pumpkins that are growing normally, right beside it.  We always liked to compare the milk-fed pumpkin with its brothers and sisters right next to it, to watch it get bigger in every possible way. 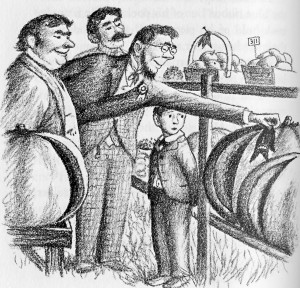 …the tall judge leaned, stretched out his arm slowly, and he thrust the pin into Almanzo’s pumpkin. . . .

Almanzo got a blue ribbon at the fair for his milk-fed pumpkin.  If you do it right, you probably will, too.