Animals and birds are limited  to what kind of house or nest they can build. When we discover an animal’s home, we can almost always tell what sort of animal it belongs to.  Even with birds, no two kinds will build the same sort of nest.  Some nests are tidy and tight and look just like a bird’s nest from a picture book, while other kinds of birds will be content in a nest that looks like a pile of grass or straw with no visible means of support.  Some birds don’t build at all; they just lay their eggs in another bird’s nest and take off! 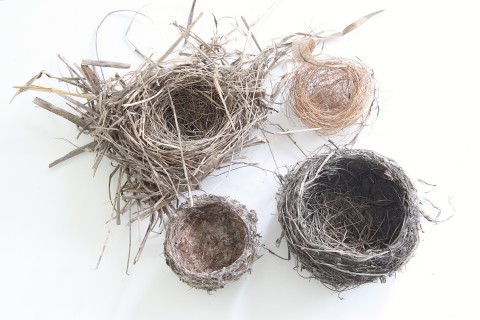 People, on the other hand, can build any kind of house they can imagine.

As Charles Ingalls reminds Laura in “The Long Winter,” p. 13, “. . . look at that muskrat house.  Muskrats have to build that kind of house. 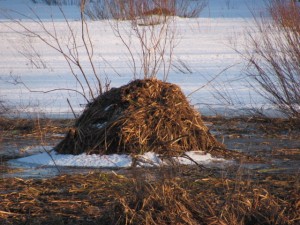 They always have and they always will.  It’s plain they can’t build any other kind.  But folks build all kinds of houses.  A man can build any kind of house he can think of.”

In Laura Ingalls Wilder’s On the Banks of Plum Creek,  p. 11, she describes their latest little house in Minnesota, which was a dugout.  Now, a dugout is really nothing more than a dirt cave with a door and, if you’re lucky, one window.  The Ingalls’ dugout had a door and a window beside the door, so there was some natural light inside.  “But the wall was so thick that the light from the window stayed near the window.” 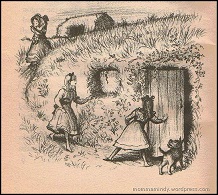 That window was made of greased paper, not glass.  Pioneers didn’t put glass in their windows until they were sure they were going to stay a good long while; glass was expensive.  It was an investment in longevity.  A house with glass windows represented people who were there for the duration.

Most pioneers started out with greased paper windows because they weren’t sure how long they might be in that particular house. 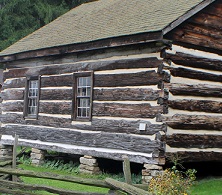 The window had to be covered so the insects and wild animals couldn’t get in, but it also needed to let the light in.  Whatever the window cover was, it had to be super cheap.  Voila:  greased paper.

Now, you might be wondering how a window covered with paper could be of much use.  How much light could get through paper?

Not much.  But GREASED paper, now, that was an entirely different thing.

When you grease a piece of paper, the grease fills in all the fiber gaps, and any light that hits it doesn’t scatter; it passes right through. Water doesn’t do this; it dissolves the paper, whereas grease or oil just reinforces the paper and lets the light pass though.  Not transparent, exactly, but certainly translucent. It let enough light through to be useful.

Until someone accidently poked a hole in the paper, or a bear punched through, the family inside had enough light to get by until they could afford glass.