Kirk Montgomery and our friends at 9News here in Denver have created a whirlwind of excitement over the Broncos amazing season with Clingy Thingys – United in Orange. Fans in Denver can’t get their hands on them fast enough. 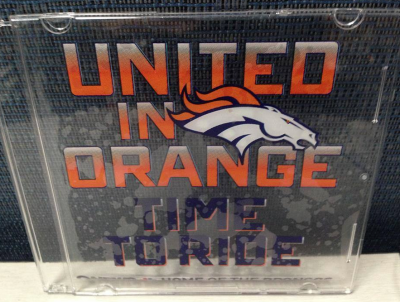 So that left us to answer the question – how does the Clingy Thingy work?

The Clingy Thingy does not use adhesive to attach to glass or plastic so it isn’t permanent. The “thingy” attaches using static electricity. Similar to the way your hair sticks to a balloon.

Static electricity involves extra electrons. When you rub a balloon on someone’s hair, the balloon picks up electrons, leaving it negatively charged and the hair positively charged. Opposites attract, so the balloon will stick to the hair, or cause the hair to stand up if the balloon is held above the hair.

When you bring a charged balloon near pieces of paper, the paper isn’t charged so you might expect nothing to happen. But the paper is attracted to the balloon. Why? The negative charge on the balloon repels the electrons in the paper, making them (on average) farther from the balloon’s charge than are the positive charges in the paper. Because electrical forces decrease in strength with distance, the attraction between the negatives and positives is stronger than the repulsion between the negatives and negatives. This leads to an overall attraction. The paper is said to have an induced charge. This explanation applies to a charged balloon sticking to a wall and a charged balloon attracting other uncharged objects.

3 Things You Can Do with Your Clingy Thingy

Here are a few ways to display your Clingy Thingy in the name of science.

There will be a tornado of orange at Sports Authority Field this Sunday as the Broncos beat the New England Patriots. Stick your Clingy Thingy to a clean plastic soda bottle (upside down), fill that bottle about 3/4 full with water. Then attach a Tornado Tube to the top and another soda bottle to the bottom. Watch the message be revealed as the water swirls down to the bottom bottle. 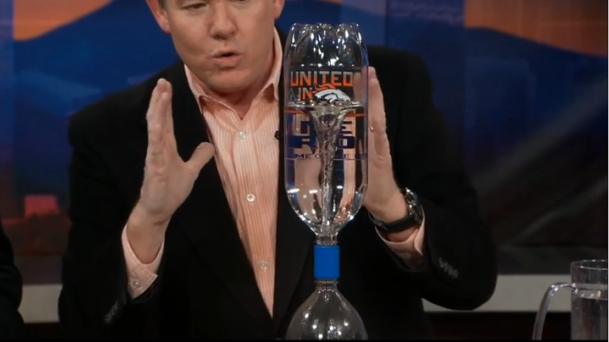 Place your Clingy Thingy face up under a clear dish or pie pan. Fill the pan with Water Balls.  The message will disappear because the water balls will refract the light. Pour water slowly into the dish. As the balls disappear, the message will appear. You’ve changed the refraction to reveal United in Orange! 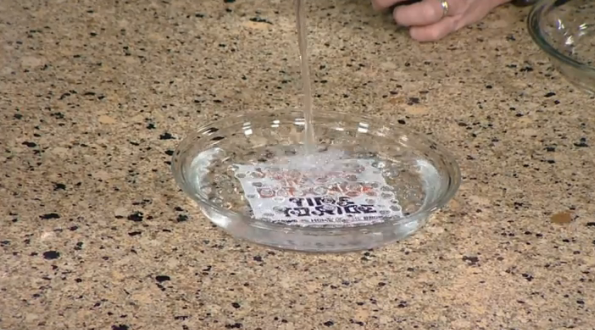 What We Will Do to the Patriots Sunday

The Broncos will be on fire and light up the field. They will burn the Patriots.
(Don’t try this demonstration at home). 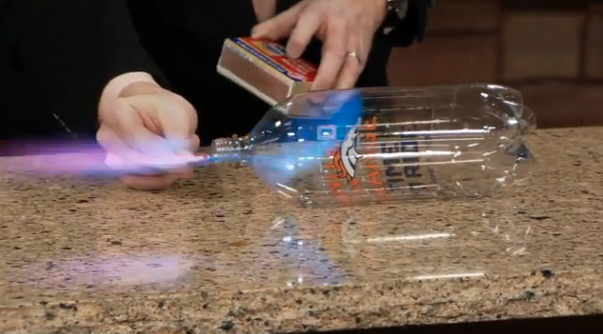 Follow 9News Facebook page for updates on where they will be to hand out the Clingy Thingys.

Egg in the Bottle Trick – A Special Request from Twitter
What's That in the Sky? Is it a Bird or a Plane? Nah, It's Science!
Mysterious Floating Water Science Experiment
Steve Spangler Explains the Science Behind on The Doctors Science Lab
Going Green and Plastic Free
Skewer Through the Balloon Experiment Surprises Weathercaster
Thanksgiving Table Tricks – Egg Drop Inertia
The Science Behind Worms
2 replies