A few weeks ago, Steve Spangler received a tweet from an elementary school teacher:

April Von Maxey teaches fourth grade science at Tavares Elementary School in Tavares, Florida. She is a tad biased, because it is also the school she attended as a child. Mrs. Von Maxey teaches alongside many of her grade school teachers. 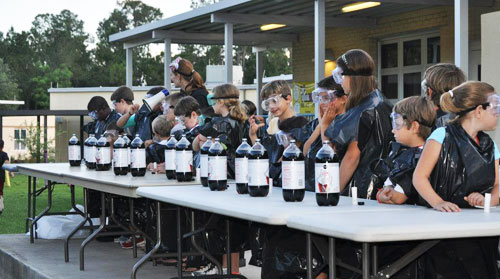 Last year, the superintendent challenged all elementary schools in the district to become STEM schools. To complete the certification, the school had to hold a science fair that involved a community business.

Mrs. Von Maxey took on the challenge and coordinated this year’s science fair. She reached out to local community business partners to participate as sponsors or bring displays or activities. They had 10 businesses participate and hope to double this next year. Their big wish is to get a Sea Plane at the science fair. Taveres is America’s Sea Plane City after all.

To encourage and motivate kids to participate in the science fair, Mrs. Von Maxey promised the first 25 kids who signed up would be a part of a special secret experiment. To choose the special experiment, she had to think of something that would be big and worthy of all of the hype – Mentos and Diet Coke geysers. What else could make such a splash? 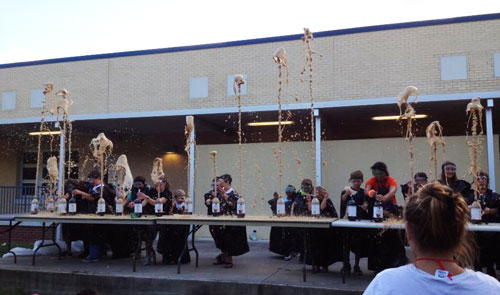 Even though the kids had goggles and trash can raincoats, they were all soaked. There’s nothing like getting completely immersed in science! Mrs. Von Maxey hopes to have 50 kids participate next year. (And we can’t wait to see the pictures.)

The science fair also had 25 volunteers who manned activity/experiment stations that ranged from construction paper and air compressor rockets, to Oobleck, to DIY lip gloss to Screaming Balloons and Balloon Skewers.  This was more than a “come-see-my-assignment science fair.” Around 250 people attended the science fair night.

Not a bad way to wrap up her ninth year of teaching. 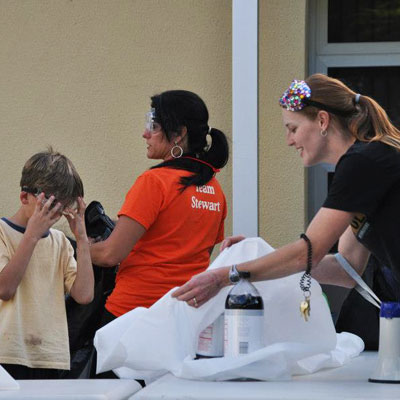 Mrs. Von Maxey couldn’t give us a favorite experiment, explaining “that’s like choosing which of your children is your favorite, haha!!” Every activity is her favorite. She has spent the last five years searching for the best activities, demonstration, projects and experiments to include in her classroom curriculum. Ms. Von Maxey also attended Steve’s Boot Camp in Orlando, saying it changed her career.

I try to have something for every lesson. I’m ADHD and a kinesthetic and visual learner, so I understand my students need things that capture their attention and in different modes too.  If I REALLY had to choose, I’d say the bubble solution experiment that I incorporate when we learn matter and solutions. It includes teamwork, incorporates math (they measure the bubble ring left on the desk), involves amazement, and of course…goggles. Gotta sell it, right?  But, what I love most about that experiment is that I ALWAYS hear: ‘I’m SO gonna do that when I get home.’  If they say that, I win.

Mrs. Von Maxey adds that the bubble experiment may be on its way out next week when she finishes building a Blue Man Group drumbone to teach sound. “Yeah, I’m totally geeked out,” she says.

Speaking of geeked out – Mrs. Von Maxey’s lab glasses are bling’ed out with gems. 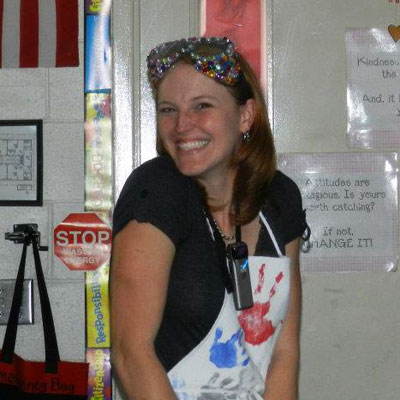 If all that hands-on science and amazing lessons isn’t enough, Mrs. Von Maxey decorated her classroom with a MythBusters theme, ” I wanted a theme for my classroom that most kids could apply to real life.”

Her students work in Build Teams named after each MythBuster, each unit is called an “episode” and they study the processes they take for different experiments. It’s not always the exact scientific method process, but does that really matter when the kids are inspired?

Through two grant programs, Mrs. Von Maxey’s husband built her a MythBusters lab station. “It’s crazy the things teachers do for our classrooms,” she adds. 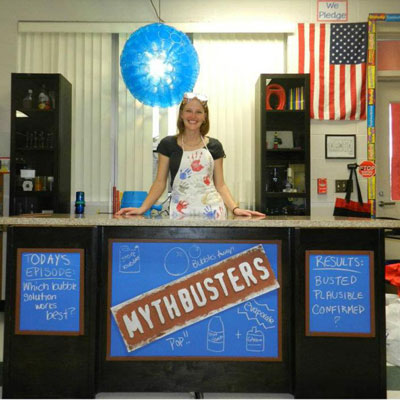 The set gets a lot of extra use once a month in a MythBusters after-school club for 30 fourth graders. They complete a cool science experiment, eat pizza and dissect an episode of MythBusters.
When we asked Mrs. Von Maxey to describe herself, she responded, “teaching really is who I am.”

Since she was six years old, Mrs. Von Maxey wanted to be a teacher. She remembers being the only kid who played school with stuffed animals.

The stuffed animals are put away now, replaced by real animals in the classroom. Mrs. Von Maxey says she keeps them in her classroom to teach self-discipline, compassion, and responsibility. The animals (currently four hermit crabs, a Cuban tree frog, rabbit, hamster and three chick hatchlings) to provide yet another hands-on experience with animal instincts, behaviors and the preciousness of life.

Mrs. Von Maxey is without a doubt a teacher who gets it to the dinner table every night. She is an inspiration for all teachers to ignite a passion of learning and discovery in their students. Huge thanks to Mrs. Von Maxey for sharing a picture of her scientists with Steve and the rest of us at Steve Spangler Science.

The Science Behind Tornadoes How the Planets Got Their Names – Stories, Not Science
Scroll to top
Create a new list