Rescuers are still digging through the rubble and debris after a monster tornado roared through Moore, Oklahoma yesterday. Spectacular video is surfacing of the tornado that leveled neighborhoods, schools and more. 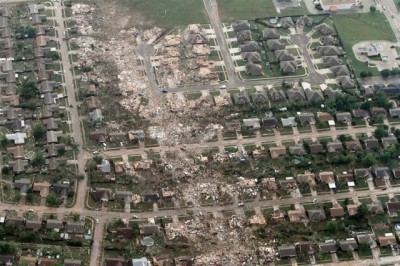 How Does a Tornado Form?

Tornadoes need two things to form – a thunderstorm and wind shear. Wind shear is created from winds blowing in different directions and increasing with height. The winds are at two different altitudes and blow at two different speeds. For example, a wind at 1,000 feet above the surface blows at 10 mph and one at 5,000 feet blows at 25 mph. This creates an invisible column of horizontal air that is rotating. The rotating air will be drawn into the thunderstorm cloud by the updraft which tilts the air. If the column gets caught in the supercell updraft, the spin is tightened and it speeds up. (A lot like an ice skater’s spin speeds up when arms are pulled close to the body.) The air becomes more horizontal and the cloud becomes a funnel cloud. Rain and hail cause the funnel to touch the ground. When it does, it becomes a tornado.

Watch this video of the funnel and then tornado forming from the beginning. (The video is raw and you may want to skip through the parts where the camera is down.)

What is the Fujita Scale?

The National Weather Service originally listed the Moore, Oklahoma tornado as a category EF-4, but after a survey of the area, they upgraded it to an EF-5. The strongest type of tornado with wind speeds of more than 200 mph.

The Fujita-Pearson Scale was created by Tetsuya Fujita and Allen Pearson in 1971. In 2007, it was updated and renamed the Enhanced Fujita Scale. The new scale matches wind speeds and damage caused by the tornado. The EF scale is primarily a damage scale, as wind speeds are not rigorously verified. Meteorologists and engineers determine the EF rank after surveying damage on human-built structures and vegetation, and analyzing ground-swirl patterns, radar tracking, eyewitness testimonies, media reports and pictures and video. The strongest tornado is an EF5. Only eight EF5 tornadoes have been documented in the United States since 2000. One being the 2011 twister that wiped out the town of Joplin, Missouri. That tornado killed 158 people and was the deadliest tornado in 58 years.

The Oklahoma tornado was on the ground an incredible 40 minutes, creating a 17-mile long damage path through the town of Moore. The tornado was 1.3 miles wide at its largest point. The sheer energy of the output of the storm equalled the bomb ignited in Hiroshima.

Hurricanes are tracked along a long and wide path, allowing residents in the way to get to safety long before the storm hits. Tornadoes are not as easy. Usually people have 10 minutes or less to prepare. According to NOAA, residents in Joplin had about 30 minutes after the first siren to seek shelter. 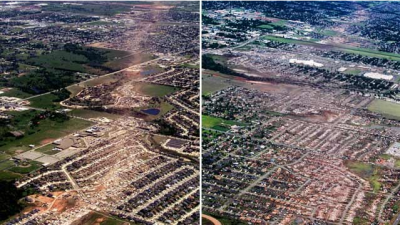 Sue Ogrocki/Reuters | Tony Gutierrez/AP Photo
The path of destruction, left, taken by tornadoes that hit the Oklahoma City area, May 2, 1999, can be seen from the air over Moore, Okla., and An aerial view of a tornado’s path is seen over Moore, Okla., May 21, 2013.

A Colorado-based project began this week to develop a better warning system for severe storms and tornadoes. The project, the Mesoscale Predictability Experiment (MPEX), has the goal of predicting precise warnings six to 24 hours in advance of a storm. Scientists will drop parachute devices from small planes in Tornado Alley – the midwest section of the U.S. these instruments will collect information on temperatures and pressures at different altitudes to help weather computers come up with accurate predictions.