A video of Duncanville High School student Jeff Bliss has gone viral after a classmate recorded his rant in the classroom last week. Bliss is an 18-year-old sophomore who returned to 10th grade after dropping out. He says he realized the importance of an education for his future. He now takes his education and the learning of others very seriously.

Bliss had questioned why the teacher didn’t give the students more time to prepare for a test. She asked him to leave the classroom and he began sharing his opinions of why students were not reaching their true potential. He claimed the teacher only passed out worksheets and packets instead of creating lively and engaging discussions.

In Bliss’ opinion, the classroom time was a waste and challenged the teacher to get the students excited about learning. He also felt teachers must reach out and touch the hearts of their students to truly engage them. 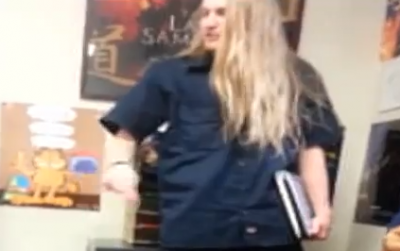 A local television station reached out the school district for comment. The district said they want both students and teachers to be engaging in the classroom but believe Bliss could have expressed his concern in a better way.

One of Steve Spangler’s mottos is to “get it to the dinner table.” Lessons should be so engaging and exciting that the kids can’t wait to share it at the dinner table. Packets and worksheets should support the lessons but not be the entire lesson. No one has ever gotten inspired over doing a worksheet.

So many teachers are inspiring and engaging but some fall short. Teaching shouldn’t be constantly entertaining, but it should spark and excite the students’ interest in learning. Students must meet the teachers halfway. Education is a collaboration.

Where do you land on this issue? Has the teacher been given a fair chance? Did Bliss unfairly rant about his teacher or did he have a point? He obviously touched a nerve, because his rant went viral.

Pinterest for Teachers – How to Get Set Up
1 reply

What Is It Like to Share the Spotlight with Steve Spangler? Teachers Save 20% – Thanks for All You Do in the Education of Our Chi...
Scroll to top
Create a new list